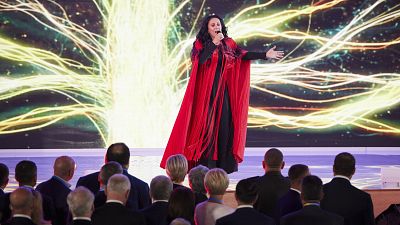 The EBU has announced that no Russian act will participate in this year’s Eurovision Song Contest.

"The Executive Board of the EBU made the decision following a recommendation earlier today by the Eurovision Song Contest's governing body, the Reference Group, based on the rules of the event and the values of the EBU," the organisation said in a statement on Friday evening.

"The decision reflects concern that, in light of the unprecedented crisis in Ukraine, the inclusion of a Russian entry in this year’s Contest would bring the competition into disrepute."

We remain dedicated to protecting the values of a cultural competition which promotes international exchange and understanding, brings audiences together, celebrates diversity through music and unites Europe on one stage.

Organisers of the Eurovision Song Contest had been hit with a number of requests to ban Russia from competing in this year's competition.

Scheduled to be held between 10-14 May in Turin, Italy, the contest is split into two semi-final heats before the grand final on Saturday 14th. Both Russia and Ukraine were listed as performing in the first Semi-Final on 10 May. Ukraine are currently scheduled to end the first half, and Russia were listed to end the second.

What happened in the lead up?

After Russia began a full military assault on Ukraine on Thursday, many people began to suggest this should result in a ban from the contest. But yesterday evening, the EBU (European Broadcasting Union - the organisation behind the contest) remained impartial on the matter, releasing a statement saying:

“The Eurovision Song Contest is a non-political cultural event. The EBU is however concerned about current events in Ukraine and will continue to closely monitor the situation.”

Chief amongst those calling for Russia's suspension is Ukrainian state broadcaster UA:PBC, the chair of whose board, Mykola Chernotytsky, wrote an open letter asking the EBU to suspend Russia's membership of the union and exclude Russia from Eurovision Song Contest 2022.

"As you know, on February 21, 2022, the Russian Federation decided to recognize the "independence" of its quasi-entities in the temporarily occupied territories of Ukraine – the so-called "Luhansk People’s Republic" and "Donetsk People’s Republic". By such actions, the Russian side disregarded international law, the UN Charter, and violated the sovereignty and territorial integrity of the state of Ukraine within its internationally recognized borders," she wrote.

"Such actions are the result of Russia’s long-term aggressive policy, which is implemented in part through propaganda through biased Russian media, including EBU broadcasters First Channel and the All-Russian State Television and Radio Broadcasting Company."

On Friday, Finland's national broadcaster Yle said they would pull out if Russia was permitted to keep their place.

Russia had not yet decided who was to represent them in Turin in May. Ukraine, however, has already incurred political controversy with the story of their representation.

Singer Alina Pash won Ukraine's national competition with her song "Tini Zabutykh Predkiv" but the singer had to withdraw due to accusations that she visited Crimea illegally in 2015.

She posted on Insta: "I am a citizen of Ukraine, I follow the laws of Ukraine, I try to bring the traditions and values ​​of Ukraine to the world. What this story turned out to be is not at all what I put into my song.

I am an artist, not a politician."

This decided, the broadcaster awarded the vacant space to second-placed 'Kalush Orchestra'. It is they who will be competing in Turin.

It is commonplace for EBU chiefs to meet regularly when controversy threatens upheaval, and Euronews awaits further statements on Friday to signal any potential change in the policy set out by the statement today.

Has anyone ever been banned from Eurovision?

Yes. Russia and Ukraine have been here before.

After Crimea's annexation in 2014 relations understandably soured. The protracted conflict in Ukraine's eastern regions took its first Eurovision effect in 2016 when Russia complained about the Ukrainian entry - which won - due to its lyrics relating to Russia's treatment on Crimean Tartars in the 1940s. Eurovision decided that the historical nature of the song meant that it passed the censor.

However, Ukraine, having won the contest, held the 2017 edition and did not allow the Russian representative, Julia Samoylova, entry to the country. The rationale being that she had performed in Crimea, and entered via Russia, which is unlawful in Ukraine.

This is not the same as an outright ban as it did not come from the organisers, it was an internal national decision. In fact, the EBU threatened Ukraine with disqualification from future contests due to their conduct.

Last year's upheaval focus, Belarus, was thrown out of Eurovision 2021 for lyrics that the EBU deemed unacceptable.

The organisers asked Belarus to submit a different song. They did. Then that was also deemed unacceptable.

On March 26 2021, Eurovision released a statement concluding that "the new submission was also in breach of the rules of the competition that ensure the Contest is not instrumentalised or brought into disrepute.

As BTRC have failed to submit an eligible entry within the extended deadline, regrettably, Belarus will not be participating in the 65th Eurovision Song Contest in May."

In the aftermath of the Russo-Georgian War in 2009, the contest was being held in Moscow.

Georgia's planned entry, Stephane & 3G, were heading to Russia with the song "We Don't Wanna Put In" until the EBU objected to the lyrics as they appeared to criticise Putin. The Georgians said no when asked to change the words.

In a separate statement to the Eurovision reaction, the EBU noted, also on Thursday, that:

"All media broadcasters and the EBU as a union are focused on doing our job for the public in difficult circumstances and will not hesitate to condemn any infringements or violations of press freedom."