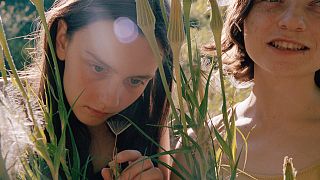 Life certainly isn’t imitating art in Ukraine this week, as the country’s creatives are forced to flee, fight or hide while under invasion from Russia.

The threat to Ukrainian culture was realised with the destruction of the Ivankiv Historical and Local History Museum by invading Russian forces on Sunday, which meant the irreparable loss of some of Ukraine’s finest folk art.

“Russia has deliberately burned to the ground the Ivankiv Museum north of Kyiv,” wrote Getty President and Chief Executive, James Cuno, in a letter posted on the Getty Trust’s website on Monday.

Among the works burned were around 25 paintings by Maria Prymachenko (1909-1997), who received the Taras Shevchenko National Prize of Ukraine in 1966.

Her work, described as ‘naive art’ due to the artist’s lack of professional training, often depicts peaceful, agrarian motifs and fantastical beasts, all rendered in striking, bright colours.

Choosing What to Leave Behind

“While Russian troops are in Ukraine, we will not able to protect, not only museums, but people. There are children that die every day,” said Kateryna Taylor, prominent art curator and founder of Port.agency in Kyiv.

Speaking from Uzhhorod, on Ukraine’s border with Slovakia, she noted that it had taken three days for her and her family to reach the frontier city; which is an 11-hour drive from Kyiv in peace time.

“We were absolutely sure we were going to leave [Ukraine], but by the time we got here, we understood that we cannot do this,” she said of her decision to stay behind and assist with the ongoing humanitarian crisis. Hundreds of thousands of people have already fled their homes and their country in the last week.

Getting out of Kyiv meant making the difficult decision to leave art, offices and resolute family members behind. “I know that some of the European museums are happy to accept the collections of Ukrainian art, but believe me, there is no way to transport them,” said Taylor.

“The cars and buses who go out of the country, they go with people. There is no place for art. You cannot compare human life with an art piece.”

Many artists and curators across the country are trading their canvases, brushes and paints for pens and humanitarian equipment.

Pavlo Makov should be preparing his work to represent Ukraine at the 59th Venice Art Biennale in April. Instead, he finds himself sheltering from Russian bombs in an air raid shelter in Kharkiv.

He recently co-signed a letter from the Ukrainian Pavilion, calling for Russia to be removed from La Biennale. Before a decision was made, the artists and curator representing Russia resigned from their positions in a tacit show of disapproval of Putin’s war.

Ukraine is home to seven UNESCO World Heritage Sites, including Saint Sophia Cathedral in Kyiv and the Ancient Greek city of Chersonesus in Crimea.

Petrykivka painting, which comes from a rural region of central Ukraine, a few hours from Dnipro, is also recognised by UNESCO. There is a genuine concern for those institutions as the barrage of Kyiv intensifies. But also, for newer art institutions representing the new face of Ukrainian culture as well.

“In the last 10 years, I’ve noticed a huge movement in visual art in Ukraine. So many more young artists, so much more art, so much focus on art,” said visual artist and photographer Yelena Yemchuk.

Born in Kyiv in 1970, she spent most of her formative years in Ukraine, before moving to the US. In 2011, she released Gidropark, containing photography from one of Kyiv’s islands in the Dnieper River. After the Maidan, she began a series of visits to Odessa, all the while documenting the people and the changes taking place in her country.

This outpouring of visual voices coincides with the country’s increasing sense of independence and autonomy, a country experiencing the world through fresh eyes as the Iron Curtain rusts away.

“I think that’s why Putin is so pissed, because he’s afraid that the Russian people will do the same thing,” said Yemchuk.

Her Odessa photos focus heavily on young people and on their relationships with their surroundings and circumstances. In one series of photos, impossibly young faces stare out from beneath helmets and camouflage.

“Ukraine is really standing up for the free world, and I think photographs of real people, in real situations, in real life during a crisis like this is very important for people to see,” said Yemchuk.

This sentiment was echoed by Kateryna Taylor in Ukraine: “I believe that in 2022 we have that strong understanding and feeling of who we are and what we fight for, so we will have another cultural revolution as soon as this has ended.”

Kateryna Taylor has set up the artists.support.ukraine Instagram page to share works from artists around the world in support of Ukraine.

Yelena Yemchuk’s new book Odesa is due to be published by Gost Books later this year.