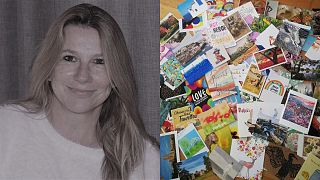 During the 77 days she spent in prison, Michelle Charlesworth received and wrote so many letters the other prisoners joked she needed a secretary.

The 56-year-old climate protester was locked up for two stints this year - both times for standing outside an oil terminal near Birmingham, England with a placard.

The grandmother is among 152 Just Stop Oil supporters who have spent time on remand or served prison sentences for peaceful protesting in 2022.

At present, 24 are still behind bars, and the public are showing their appreciation through a stream of letters, postcards and emails.

“It’s a lifeline of contact to the outside for me,” says Marcus, one of the climbers who caught the nation’s attention when they scaled the QEII (Dartford Crossing) bridge in October, closing a motorway for two days. The pair have been remanded in custody pending a trial next year.

From inside, Marcus writes “It’s really feeling valued and knowing I can still inspire from here. And, similar to on one level when you get a notification, when we get emails or letters it’s endorphins being released; someone’s writing again, it’s something exciting that always brightens up my day when I get messages.”

Around 15 protesters are expected to spend Christmas Day in prison, an increase on last year. Robin, director of activist group Fossil Free London, is one of Marcus’ correspondents.

“We write to people in prison because we’re a movement of solidarity and we support each other,” she says. “There's a particularly compelling case for support there, because they’re locked up in a situation they’ve never been in before, and probably never expected to be in, because they took enough risk in an attempt to protect everyone.”

How does it feel to be jailed for climate action?

In his dispatches to Robin, Marcus describes how he seeks out nature in confinement.

“The yard we run in has a real patch of grass everyone walks around. I’m the only one running… I’ve been picking up litter there many-a-time and received a “positive” for it the other day,” he writes to Robin.

“I’ve managed to create plant life in my cell by sprouting sunflower seeds, yum!” he adds. The other highlights are in paper form; pictures of animals cut out of newspapers, and “lovely cards” people sent.

The epistolary system differs from prison to prison. But it tends to be that postcards get a freer passage, whereas letters are opened and passed on as black and white photocopies. Some prisoners have to queue to access their emails on an intranet system, so prefer to have longer messages, poems and articles printed off and sent in. Moonpig or other personalised greeting cards ordered online are welcome.

Letters even come from the UN

Michelle was released from prison for the second time on 29 November, after 44 days spent between Foston Hall and Drake Hall in the East and West Midlands. “People were saying that they’ve never seen so much post for one prisoner. So I felt really blessed,” she tells Euronews Green.

Among the pile was a card from the representative of the human impacts of climate change at the Quaker United Nations Office in Geneva. They explained that followers of the religion hold ‘Meetings for Sufferings’ established centuries ago as many Quakers were imprisoned for “speaking truth to power.”

“‘Blessings to you all, courage,’ she wrote, ‘patience and love, we are all keeping you in the light.’ Messages like that would just make your day,” says Michelle, who co-founded a climate change emergency charity in Oxfordshire.

How are climate protesters interacting with other prisoners?

Her noticeboard grew to be three cards deep, conspicuously colourful in an otherwise grey cell. It was filled with “blue skies and beautiful views and animals and birds and bees and insects and everything you can imagine,” says Michelle, who invited other prisoners to enjoy the display.

“When I knew that I might go into prison for not being a bystander, I had to prepare myself,” she explains. “I decided that I would try and be this shining light and to continue to spread the message.”

Michelle spoke to receptive prisoners and officers alike. She was surprised to find the latter were not aware why she was in there, and often shocked to discover why.

“Some people were really interested, others weren't,” she says. “And I understand why they weren't; it's because their lives are so complex, they're just trying to survive in this toxic system that we all live in. So no judgment. And I would know not to continue that conversation. But those that were interested, the officers particularly, I’d give them homework.”

Mair (Mya) Bain, 35, is being held in prison after she was arrested halfway up a gantry on the M25 last month, holding a Just Stop Oil banner.

“I have made friends with other women and trans men in prison,” she writes, in a letter transcribed by a friend. “I am the only climate protestor in the female side of Peterborough prison. Most of the other prisoners are curious or supportive of our protests, despite some of them being disrupted by the M25 traffic delays. They are shocked that I am in prison, and that I am refused bail. We all agree and know how unjust the government and justice system are.”

Are climate protesters being treated fairly in the UK?

There has been a significant rise in the number of people being held on remand - in custody while awaiting trial - in England and Wales this year. The remand prison population hit 14,507 at the end of September according to a Ministry of Justice count, the highest figure in 50 years.

Arrested climate activists from Just Stop Oil, Insulate Britain and Extinction Rebellion are amongst them. “I am a political prisoner, as are all of us still on remand,” writes retired teacher Catherine Rennie-Nash from Bronzefield Prison.

“I think people being in prison on remand is a massive injustice - being locked up without even having an opportunity to defend yourself, while posing no threat to people around you in society,” says Robin.

At the same time as the justice system is struggling to process people, the UK government is intent on seeing more aspects of protest criminalised with its Police, Crime, Sentencing and Courts (PCSC) Bill passed in April.

“I think it's a really worrying state of affairs that we’re now seeing people in prison who have committed no violent acts and threatened no violence to anyone,” adds Robin. “All they've done is try to draw attention to the climate crisis. That is deeply concerning and welcomes Britain into a club of nations who maybe we don’t want to be associated with in terms of their judicial system.”

Why are Just Stop Oil protesters in prison?

Michelle was sent to prison in September as she (alongside five other defendants) was found to be in contempt of court for breaching an injunction sought by the Shell-operated oil terminal against protesters.

If you ask Michelle why she took the action she was aware could land her in jail, her thoughts quickly turn to her three-year-old grandson Oscar.

“I know it’s not just about Oscar, it is about humanity, but Oscar is the closest manifestation to me of someone whose future is so very uncertain,” she says. “And I honestly wouldn't be able to hold him and love him authentically if I wasn't doing what I'm doing.”

A fortnight out of jail - where she was met by a welcoming party of some 20 supporters - Michelle’s focus is on reconnecting with her family. Her conviction to the cause is unwavering despite the separation, and the “rollercoaster” days in prison where she feels too low to write back to people.

“I know that I'm on the right side of history. I know with every fibre of my being that being in civil resistance right now is what we should all be doing,” she says.

“That gives me such joy really, to feel that freedom of being able to stand up and say no I'm not going to stand for this, I've never felt more free than what I feel right now.”

The Facebook group ‘Rebels in Prison Support’ has advice for writing to protesters in jail, and shares their news. Climate activists are being supported in many other ways too. A fundraiser for the second QEII Bridge climber, Morgan, has surpassed its target of £5,000 towards repair work after he claims police raided his home.