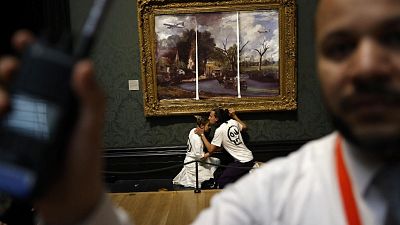 Activists from the 'Just Stop Oil' campaign group, with hands glued to the frame of the painting 'The Hay Wain' by English artist John Constable.   -   Copyright  CARLOS JASSO / AFP
By Rosie Frost  •  Updated: 09/07/2022

Just Stop Oil hit the headlines this week after activists glued themselves to paintings in art galleries across the UK.

In recent weeks they also stormed the track at the British Grand Prix, earning themselves the support of Formula 1 driver Lewis Hamilton.

Others have had a more mixed reaction to the group’s protests. From branding them as ‘extreme’ and ‘unnecessary’ to accusations of privilege among those who took part.

So who are the activists behind these contentious protests and what exactly do they want?

We spoke to two members of Just Stop Oil to find out in their own words.

Who are Just Stop Oil?

Founded back in December, Just Stop Oil was created to put pressure on the UK government to stop new and existing fossil fuel deals. It is a coalition of different groups inspired by organisers from Insulate Britain and Extinction Rebellion.

Their message has spread and, as group member Indigo Rumbelow tells Euronews Green, has brought a much broader range of participants than people might expect.

“And there's, also in prison, a 29 year old bricklayer from the north of England, Josh Smith.”

Smith was part of the group that disrupted the British Grand Prix at Silverstone on 3 July.

Twenty year old Hannah Torrance Bright is a student at Glasgow School of Art. She is also one of the people that glued themselves to Horatio McCulloch's painting ‘My Heart Is In The Highland’ at Kelvingrove Art Gallery, Glasgow in June.

“I'm doing stuff that I never thought I would be doing in my entire life,” she says.

But being terrified of the consequences of the climate crisis is one of the reasons Hannah says she is taking part. Regardless of whether people are engaged with the issue, she says, it's not “us versus them” as everyone will be affected.

“I think we're all scared. So much of the response around this has just been out of fear, and hyper focusing on little details of what we're doing to avoid actually talking about the bigger issue.”

What do Just Stop Oil want?

“We demand that the government immediately halts all future licencing and consents for the exploration, development and production of fossil fuels in the UK,” Indigo explains.

They aren’t here to be liked, she says, comparing what they are doing to the suffragettes and adding that any effective social movement won’t be immediately popular.

“I want a future and I want my government to stop trying to kill me.”

It isn’t about personal actions or small individual choices but the government's response to an “emergency” situation. We are rapidly running out of time to take action, Indigo adds.

In the words of the UK’s ex-chief scientific advisor Sir David King in 2021, what we do in the next three or four years will determine the future of humanity.

I'm not doing this because I'm brave or insane or any of those things. I'm just doing it because I care and I'm afraid.

“And I guess in the short term, directly from our actions, what I want from people who aren't in the government, is to join us,” says Indigo.

“It's so easy. I'm not doing this because I'm brave or insane or any of those things. I'm just doing it because I care and I'm afraid.”

Why are they glueing themselves to paintings?

The two activists say that, though Just Stop Oil has specific targets for their actions, the widespread nature of their protests is meant to break through the illusion that everything is okay.

“The aim was just to say to our culture, basically, that you can't be hiding from this. At this stage, everyone is responsible, everyone is going to be impacted by the climate crisis,” says Hannah.

The art world, she says, doesn’t exist in isolation.

“I'm an art student, myself, and it does sometimes feel like the art world views itself as existing in isolation from the rest of the world. But, you know, the climate crisis affects all of us.”

“We want to show that this illusion that everything is okay is just not true and that we're in an emergency, and we should act like that.”

What does Just Stop OIl have to say to their critics?

In recent weeks, Just Stop Oil’s actions have attracted a lot of attention through the media and social networks. Not all of it has been positive.

So what do they have to say to those who believe these actions are ‘unnecessary’ or ‘extreme’?

The art student adds that she isn’t doing this because she wants to, it isn’t for fun. Regardless of how people react, the consequences of the climate crisis are impacting people around the world right now.

“I don't think it's extreme at all. You know, we glued ourselves to the frames of the paintings,” she says.

“I think the fact that the government is effectively displacing half the [world’s] population is a lot more extreme.”

Hannah adds that 3.5 billion people are expected to be made climate migrants in the next 50 years. With the unfathomable impacts of climate change and the warnings of scientists, she believes inaction, particularly by those in power, is the more extreme approach.

“Instead of putting that fear into outrage at us, put it into outrage at what the government is doing to all of us and the entire planet right now - and then do something.”

Indigo adds that it isn’t a never-ending campaign. Rather, the group is posing the UK government a question.