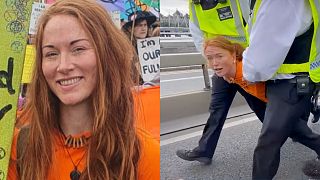 Non-violent civil resistance is the “best way” protestors can fight the climate crisis, according to an activist whose arrest went viral.

At the beginning of October, Lora Johnson was filmed being carried off Waterloo Bridge in London by police.

The 38-year-old was arrested after attempting to glue herself to the road as part of a Just Stop Oil demonstration against fracking.

A video of the arrest - in which Johnson says she is “doing this for [her] son” - went viral on social media worldwide.

The activist spent the night in Hammersmith police station, and is due to answer bail on 28 October.

Despite all this, she has no regrets about her decision - and says it wasn't as scary as you might think.

“The past has shown us that [civil disobedience] is the best way to create morally just change, at the speed at which we need it now,” she says.

“It's so easy to feel helpless in the face of such overwhelming evidence… but taking part in civil disobedience gives you back the power. You can fight for your future, for your son's future, and for your grandchildren.

“We're on the edge of a precipice, and if we don't stand up now, we're going to go over the edge.”

However, potential protesters don’t have to be arrested to get involved, Johnson insists.

“Please come down and support us, join us. It’s very hard to be arrested, and there are a lot of other ways to support if you don’t want to be arrested,” she said.

Just Stop Oil have been protesting in central London since the start of October. They vow to continue to occupy Westminster all month.

What do Just Stop Oil want?

Last month, UK authorities overturned a 2019 oil fracking ban, opening a new licensing round for companies to explore for gas in the North Sea.

Up to 100 licences will likely be given out.

Just Stop Oil is a coalition of environmental groups and activists that opposes new fracking. They want the government to halt all future licensing for the exploration, development and production of fossil fuels in the UK.

“There is a long established tradition in the UK of citizens, when they recognise that the state is acting immorally, taking action to prevent greater harm,” the Just Stop Oil manifesto reads.

“In opening new oil fields our government is directly harming us, we therefore assert our legal right and moral duty to act.”

The UK government has pledged to reach net zero by 2050. However, new oil and gas exploration is “radically at odds” with this commitment, a report has warned.

“New oil and gas development in the North Sea could produce up to 984 megatonnes of CO2 equivalent,” warned researchers from Global Energy Monitor.

If the UK exploited all of the gas fields in the region, it would exceed its legally binding carbon budget by almost two-fold.

Lora described the decision to overturn the fracking ban - and to financially subsidise fossil fuel companies - as “morally redundant.”

“About 12 billion pounds a year in taxpayer money goes to subsidise fossil fuel companies that are making record billions,” she said.

“Meanwhile, 8,500 old people died in their homes because of the cold last year.

“It’s appalling. And that’s why we're asking the government to end new fossil fuel subsidies, and to immediately move that money over into insulating our homes, and giving cheaper energy to people.”