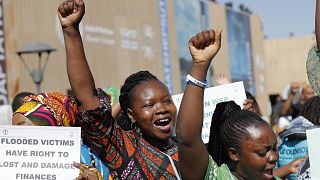 Around 50 activists gathered on Wednesday morning in the Blue Zone at COP27 to call for the end of new oil and gas exploration.

They sang, chanted and held signs with slogans that read “Get Finance out of Fossil Fuels” and “No Gas.” It was organised by the Netherlands-based organisation Recourse that campaigns for investments to be redirected away from fossil fuels and toward renewables.

Another group calling for a “swift, just and equitable phase-out of fossil fuel" joined them.

It is a rare show of action at the UN climate conference in Sharm El Sheikh, Egypt where protests have been severely limited.

Public demonstrations are banned at the conference as they are across the rest of  Egypt. The chosen resort location of Sharm El Sheikh is also difficult to reach and hotel prices soared for the dates of the conference.

Many groups said they were expecting a "significantly quieter and much more regulated" COP than last year.

Nyombi Morris, a Ugandan activist and climate migrant told Euronews Green earlier this week that he and his fellow campaigners had been denied access to the negotiation tables.

“We came to represent hundreds and hundreds of thousands of people,” he said. “But they are not allowing us to enter the room or share our stories.”

“That’s how they silence our voices.”

Last year Morris could not attend COP26 because he didn't have enough money to fund the trip to the UK. With this year's COP in Africa, he was invited as an observer at the conference.

But the Ugandan activist says that this has been largely superficial and hasn't allowed for any meaningful engagement at the event.

“I am happy that they invited me,” he says. “But I was wondering: what am I doing here? There is nothing I can do.”

Human rights groups have also criticised Egypt for stepping up surveillance during the conference. Morris says activists face a hostile environment with authorities subjecting them to intense security checks.

He claims that at the airport he was asked to provide comprehensive personal information and travel plans to security forces.

Protests are limited to a purpose-built designated area away from the main conference zone. But we are likely to see more actions take place in the Blue Zone in the coming days as campaigners say they are refusing to use it.

There were few signs of security shutting down the protest in the Blue Zone today as attendees stopped to take photos.