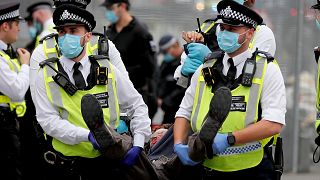 The UK government is debating a new legislation to grant police more powers to restrict protests and demonstrations.

The bill would mean the police taking a more proactive approach to dealing with “highly disruptive” protests which might cause public disturbance.

The debate over whether to enshrine the Police, Crime, Sentencing and Courts Bill 2021 into law was written over the last few months, introduced to parliament on 9 March and will be raised today by the commons.

This has become a particularly poignant point of discussion following multiple arrests at a vigil in London for Sarah Everard over the weekend. Everard vanished on 3 March while walking home from a friend’s house and her body was later found around 100km away.

Police present were seen grabbing women and leading them away in handcuffs, sparking outrage. Prime Minister Boris Johnson has said he is "deeply concerned" by the footage showing police officers detaining women.

Shame on you” crowd shout at police trying to remove women at bandstand pic.twitter.com/j79LlJAgm8

If the lengthy new piece of legislation is passed through parliament, it would be coming at a difficult time.

With numerous social movements on the rise in the UK, from protests against gender-based violence and the Black Lives Matter movement, to the urgency of the climate crisis, restricting the right to protest would face strong opposition.

Climate protests would be affected by the bill

Metropolitan Police Commissioner Cressida Dick has stated that Extinction Rebellion climate change protests in 2020 were what sparked her to discuss a change to police powers.

“Ever since the first large-scale Extinction Rebellion protest in April last year I have been talking publicly and with the government about the potential for change to powers and to legislation that would enable the police to deal better with protests in general given that the act that we work to – the Public Order Act – is now very old, [dating to] 1986,” she says in a statement.

She added that the new powers would enable police to manage protests that “are not primarily violent or seriously disorderly”.

Police chiefs would be able to impose a start and finish time to demonstrations, set noise limits and even apply these rules to one-person protest. If individuals refuse to follow police directions, they could be fined up to £2,500 (€2,916).

So far, the contentious bill has been opposed by the UK Labour party, with shadow justice minister, David Lammy, saying it was “no time to be rushing through poorly thought-out measures to impose disproportionate controls on free expression”.

More than 150 organisations have also warned that handing police tougher powers to crack down on protesters would be “an attack on some of the most fundamental rights of citizens”.

Why is the right to protest so important?

Independent global platform Open Democracy identifies six reasons as to why protest is so important in a democratic society.

What are Indian farmers protesting and how is Rihanna involved?

Activists, popstars and public figures took to Twitter in support of ongoing strikes by farmers in India.

Barbadian singer Rihanna shared an article to her more than 100 million followers, sparking others to speak out on the issue too.

A group of 40 protestors from a local Extinction Rebellion group in Cornwall, UK, has taken to the sea to protest the environmental impact of cruise ships.

A one-woman protest: Fighting fast fashion almost made me fail my masters

Being brought up in Denmark, Laura was always conscious of the way what she buys impacts the planet. As she grew, her personal journey led her to completely reconsider the way that she consumed, shunning unnecessary plastics and generally buying less.

Standing on a block of ice in the middle of the Arctic Ocean, Mya-Rose Craig has launched the world's most northern climate strike.

Last April, more than a thousand protestors were arrested across London.

A group of climate activists calling themselves Extinction Rebellion (XR) blocked roads, chained themselves to buildings and settled into makeshift camps. This was all in an attempt to get governments around the world to listen to their concerns about the growing climate emergency.