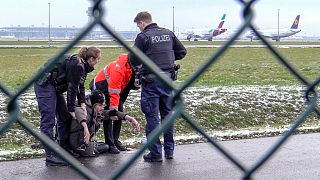 All climate-related gatherings aimed at blocking key roads and other areas will be prohibited for at least a month.

Bavaria’s state capital made the announcement on Friday after climate activists briefly disrupted traffic at Munich airport in a protest against the environmental impact of air travel.

The German city's ban on climate gatherings will run until at least 8 January.

It is aimed at ensuring "that the main routes for emergency and rescue vehicles in the city area are kept clear at all times and to avert possible harm ... that could arise due to delays in emergency travel," the city said in a statement.

It added that the events in recent days had made such action necessary.

Why did climate activists block runways in Germany?

Last Thursday, activists glued themselves to the tarmac of two of Germany's largest airports, Berlin and Munich, blocking runways and streets, according to local media.

The climate activists were protesting against cheap air travel.

Activists from the Last Generation environmental group in a statement called on the government to stop subsidising air travel and expand cheap train travel offers instead.

According to the European Environment Agency, rail travel accounts for 14 grams of CO2 emissions per passenger mile. Air travel generates 285 grams over the same distance.

Is Germany doing anything to promote train travel?

After the success of Germany’s €9 rail pass over the summer, the country announced the new Deutschlandticket, a nationwide public transport ticket costing €49 a month.

Transport Minister Volker Wissing said the move is aimed at cutting emissions and helping people to cope with the cost of living crisis.