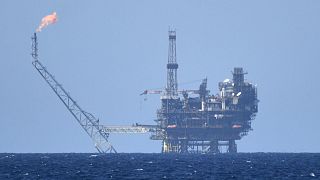 An oil and gas platform off the coast of Libya, February 2022. The Bahr Essalam Gas Field and Bouri Oilfield could be developed further by Eni.   -   Copyright  Antonio Sempere/Europa Press/ABACAPRESS.COM/REUTERS
By Lottie Limb  •  Updated: 08/12/2022

Oil and gas companies are betting on a future in which their production pushes global heating beyond 2.5C, a new report reveals.

Shell, TotalEnergies and Chevron are among the majors which recently approved $166 billion (€157bn) of investment in new oil and gas fields over the next decade, according to financial think tank Carbon Tracker.

But more than a third of this total (€55bn) is going towards sites that will only be needed if demand for the fossil fuels grows to a point where the world tips over the 2.5C threshold.

“Oil and gas companies are marketing themselves as part of the solution to climate change while simultaneously planning production increases that would lead to climate catastrophe,” says Thom Allen, oil and gas analyst and report author.

“Companies cannot claim to be aligned with global climate targets unless they are planning to cut production.”

The International Energy Agency (IEA) last year warned that no new oil and gas fields are compatible with 1.5C of warming above pre-industrial levels. This is the target enshrined in the Paris Agreement, beyond which the impacts of climate change will accelerate rapidly.

Further studies have backed up the IEA analysis, yet oil and gas giants are still ignoring the science in pursuit of profit.

Which oil and gas companies are spending the most?

Scrutinising spending plans made between January 2021 and March 2022, Carbon Tracker finds that most majors are still determined to expand their oil and gas production.

Most projects greenlit since 2021 or coming up for approval will not start production before the mid-2020s and will continue to produce for decades.

However, even a pathway leading to 1.7C, in line with countries' current announced pledges, would see demand for oil and gas falling before the end of the decade according to the IEA.

“Investors must scrutinise company spending plans, as investments in many new oil and gas projects lock in future emissions that are incompatible with Paris,” says Mike Coffin, head of oil, gas and mining at Carbon Tracker and co-author of the report released today.

“Ultimately, companies are committing tens of billions to projects that are unlikely to break even if governments deliver on their climate pledges, and investors must be aware of the implications.”

The extractive projects that could tip global warming over the edge

The projects that overshoot the 2.5C mark include a $10bn (€9.5bn) oilfield development on Lake Albert in Uganda led by TotalEnergies. This will supply the controversial East African Crude Oil Pipeline.

Woodside, meanwhile, is developing a $12bn (€11bn) Scarborough/Pluto Train 2 LNG project in Western Australia. In the 2.5C world in which this scheme is profitable, swathes of central London will fall below the tideline, according to non-profit Climate Central’s interactive map.

What have oil and gas companies said about climate goals?

European majors Eni, Shell and TotalEnergies have published plans to reduce production but they fall far short of what is required for a 1.5C pathway, says Carbon Tracker.

All three commit only to reducing oil but plan to increase gas production. The think tank calculates that TotalEnergies’ global production will be 13 per cent higher in 2030 than in 2019.

BP is the only company planning to reduce both oil and gas production, with a 43 per cent cut by 2030, broadly in line with a 1.5C pathway.

Under pressure, many oil and gas companies are promoting themselves as a part of the solution to climate change on the basis of their investment in renewables.

But the report says this “doesn’t somehow ‘offset’ the continued legacy businesses and make a ‘climate-aligned’ company”.

Announcing large-scale carbon capture projects does not negate the need for production cuts, it adds. Keeping 1.5C alive requires both a Herculean roll out of carbon capture and drastic cuts in production, but analysts argue this technology should be reserved for hard-to-abate sectors like cement and steel manufacturing, and not to justify the continued production of oil and gas.

UN Secretary General Antonio Guterres has urged that “every fraction of a degree counts” towards alleviating human suffering. ‘Paris Maligned’ calls on companies to not just set climate targets aligned with the pact, but also detail plans to achieve them in a credible way.