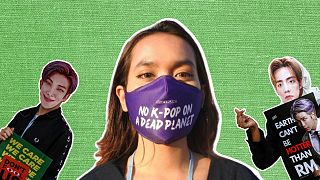 Nurul Sarifah is one of the organisers of Kpop4planet, a group of K-pop fans fighting for climate justice.   -   Copyright  Kpop4planet and AFP
By Ian Smith  •  Updated: 01/12/2022

K-pop is a global phenomenon. It’s a multibillion juggernaut with a legion of dedicated fans, some of the world’s most popular bands and a seemingly never-ending production line of talent.

So its link to combatting the climate crisis is not immediately clear.

Especially when you factor in the industry’s major output. Over 34.9 million physical copies of K-pop albums were sold in the first half of 2022 and collectible photocards are placed in each album to encourage fans to consume more and buy multiple copies.

Yet K-pop fans are known for fighting for social justice causes. When #whitelivesmatter trended on Twitter following the murder of George Floyd, K-pop stans flooded it with fancams to block out the racist posts. And in June 2020 fans registered for thousands of tickets to a Donald Trump rally that they never intended to use, leading to swathes of empty seats and stopping his supporters from attending.

So perhaps it was inevitable that they would soon get involved in one of the most important social justice issues of our time: the climate crisis.

Why do K-pop fans care about the climate crisis?

Nurul Sarifah is a 23-year-old K-pop fan from Indonesia. Along with two friends she set up Kpop4planet in March 2021. It’s a platform for people who enjoy K-pop and Korean culture to fight for climate justice together.

“I've been concerned with climate issues because I have experienced them,” she tells Euronews Green.

“I live in Jakarta and there's so many coal plants around the area, it's affecting locals by creating air pollution. We also experience floods every year and it's becoming an annual thing that makes me realise how the climate crisis is really happening and how it's affecting me and my family.”

Nurul wanted to combine “the power of the K-pop fans'' with climate activism. And so Kpop4planet was born.

As 21-year-old Portuguese member Carla Alexandra Almeida da Costa puts it: “K-pop fans are amazing, we do amazing things. So why don't we use our strength in order to save the world?”

What do K-pop fans think of becoming climate activists?

The movement has proved popular with the fandom. What started off as a voluntary role for Nurul has turned into her full-time job. Two others work for Kpop4planet full-time along with 20 volunteer ambassadors from nine countries. The group is funded by Action Speaks Louder, a charity registered in Australia who lobby to hold big companies accountable for their climate change promises.

Kpop4planet gives fans who are concerned about the climate crisis a platform to take action and support each other.

Many young people struggle with eco-anxiety and feel overwhelmed at the scale and consequences of the crisis. For Nurul, combining her two passions of K-pop and climate activism keeps her grounded and helps her to continue the fight for climate justice.

“K-pop is how we get through this madness,” she laughs.

Nurul and her colleagues have channelled most of their energy into six different climate campaigns. Over 33,000 fans from 170 countries have taken part in them.

The most successful of these has been ‘No K-pop on a dead planet’. It called for K-pop albums to go green by selling digital rather than physical albums, minimising the packaging and encouraging low carbon performances.

Carla believes that their lobbying is having an impact on the industry. She points to the example of the band Victon. For the release of their album Chronograph, they gave fans a choice between buying the usual physical album or opting instead to be sent just the photocard and receive a digital copy of the album.

K-pop is how we get through this madness.

The ‘No K-pop on a dead planet’ campaign also led to discussions between Kpop4planet, the Korean government and the entertainment industry about implementing more sustainable practices.

“A couple of them like SM Entertainment have joined the UN Global Compact and there's also JYP, they are joining the Korean Renewable 100 [a global initiative where businesses commit to running their operations 100 per cent from renewable energies]. They are the first K-pop company to join this one,” Nurul says.

“This shows that now companies, even the government, are listening to the fans' voices, not only because they are the consumers, but also because we really care about these industries.”

Aside from targeting the big companies, Kpop4planet has also tackled deforestation. Fan gifts are popular in K-pop culture. Groups of K-pop fans will come together to buy expensive gifts for their idols. Kpop4planet started an initiative where they encourage fans to plant or adopt trees for their idols and fandoms to “show care for our forests”.

The group also attended the UN climate talks COP27 in Egypt earlier this month where they urged global leaders to take steps to eliminate deforestation and took part in the Korea Pavillon.

Their appearance followed on from superstar girl band Blackpink attending COP26 last year in Glasgow where they called on leaders to take urgent climate action.

What are the stereotypes about K-pop fans?

For Nurul and Carla this increased recognition of Kpop4planet has the added benefit of combatting the stereotypes of K-pop fans.

The fandom has been compared to a cult and is seen by some as obsessive and toxic.

“I think Kpop4planet is a way for other people to look at us from a different perspective because we aren't crazy and fanatic children. We also do beautiful things,” says Carla.

Nurul agrees: “One of the reasons why some fans are not that confident to speak about climate issues is because they are scared of the stereotyping that is there about K-pop fans.

“We are so glad that our platform can be a safe space for K-pop fans that are looking for friends to work on climate action together.”