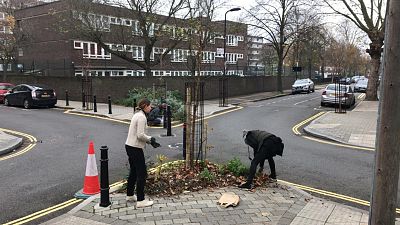 But what if there was a way to advocate for the environment in your local neighbourhood through small, everyday actions?

Guerrilla gardening is the act of cultivating plants in a public place, usually in a spot that is not otherwise being cared for, often with the aim of improving the surroundings and protecting the environment. It has a range of benefits from improving biodiversity to helping to keep temperatures low.

Jenny van Gestel, Coordinator of Guerrilla Gardeners NL, explains how transforming one street can have a far-reaching impact on the environment.

“Stones and tarmac capture the heat,” she notes. “When you remove stones and you add plants, then you know that the temperatures won't rise so much.

“There’s water retention as well; we have flash floods nowadays because of climate change, or we have really dry periods or time periods. Adding more green means that you have better water management.”

“It’s direct action against nature deprivation and depletion — highlighting the issue of biophobic urbanisation while fighting it,” explains Ellen.

“It’s fighting for people, plants, and the planet by taking action into your own hands. It’s anarchic, in the purest sense, and is challenging the status quo of what we’ve been taught cities should look like, and who can have the power and right to shape them.”

But it doesn’t have to be illicit activity. Part of Jenny’s work with Guerrilla Gardeners NL is to reassure people that there are ways to take part in this form of activism legally, even with the blessing of local authorities.

She regularly works with the municipal government where she lives in the Netherlands, identifying greening projects together with local civil servants. She also tries to encourage locals to get involved in areas near them.

“One of the things I've been doing here is trying to get people that have [tree pits] in front of their house or near their house to garden in them,” Jenny says. “There's so much you can do just by cooperating with the authorities.”

“You do not need an organisation. Just as an individual, there's so much you can do...Start small. You don't have to start with a huge garden, just start by removing one paving stone, add one plant, and then just see how it goes. See how the neighbours respond, see how the plant starts growing, and maybe you can develop it from there.”

Getting started with guerrilla gardening

Jenny believes that anyone can get started with guerrilla gardening - even if there’s no organised group near you. If you spot a neglected area of public space that no one else is using, it’s a prime opportunity to get involved.

If you’re nervous about whether it’s allowed, you can reach out to your local government, but both Jenny and Ellen say they rarely run into obstacles when planting on otherwise unused spots.

“Part of the guerrilla gardening concept is asking for “forgiveness not permission” but I’ve only ever received positive responses from people, so no forgiveness needed,” explains Ellen.

“It’s mainly about where you plant. First, you want to avoid planting on anyone’s private property or a protected spot (like a National Trust site or nature reservation).”

Ellen explains that tree pits are a great way to start. Although they don’t advertise it, many councils will allow you to plant here as long as you don’t damage the tree.

“I’ve never had any trouble just using common sense to see what’s a neglected, bare spot of soil that was meant to have plants in but now doesn’t. If the council aren’t going to look after it, why shouldn’t a resident name themselves its gardening angel?”

Remember that dogs, people, and other hazards might come along to bother your patch. So when you pick what to plant it needs to be hardy, resilient and able to cope with the climate without too much assistance from you. Otherwise, you’ll have to keep coming back to tend to the plants, meaning less time to spend on new areas.

“When choosing plants, we also take into account what would [attract] wild bees, what would attract butterflies, and so on,” explains Jenny. “That's another aspect and they're often indigenous species.”

Why is greening important?

Aside from the environmental benefits, now more than ever, caring for our local areas is beneficial for ourselves and our communities.

“It's interesting to note that the movement is growing again,” says Jenny. “Because of the previous year that we've had and people [being] stuck inside...there's a renewed interest in our own neighbourhoods.”

Ellen also sees the connection between guerrilla gardening and community connections. She notes that living in greener neighbourhoods improves mental health, life spans increase and that there are patterns indicating that crime is less common in greener areas.

“I find it empowering to positively impact my local environment and have a sense of ownership of the place I live,” explains Ellen. “There’s a real issue of young urbanites not feeling they ‘belong’ in their neighbourhood, and it’s clear why - cities just aren’t designed for people.

“Guerrilla gardening puts the power to transform the streets that people live in in the hands of the people who live there. It lifts the spirits seeing bright patches of life in otherwise bare, grey spots and I love knowing that I’m helping the local ecosystems and community.”

Gas boilers need to be phased out. But who should foot the bill?