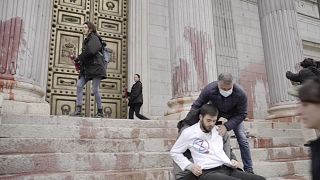 Scientist Rebellion splattered 'blood' across the front of the Spanish Parliament Building   -   Copyright  AFP
By Hannah Brown  with AFP  •  Updated: 07/04/2022

Scientist Rebellion, the science branch of Extinction Rebellion have organised a week of worldwide ‘civil disobedience’, covering 27 countries to campaign for policy change on a governmental level.

Their actions follow the release of the third IPCC (Intergovernmental Panel on Climate Change) report on Monday. One of its key messages was that it is not too late to act. If we make huge changes quickly in every part of society we may be able to limit global warming to 1.5°C.

In Madrid, protesters gathered outside the Spanish Parliament building to throw red paint on the doors and steps.

The organisation conducted a similar protest in October 2021, following the release of the second IPCC report.

The activists pasted pages of the IPCC report onto the walls of the Spanish Ministry of Ecological Transition and threw paint at it to denounce the inaction of the Spanish Government on the climate and ecological emergency.

"It is not the future that is at stake, it is the present. The present of all of us. Our mental and physical health is at stake. Crop failures, migrations, and marine flooding. What else do we need to know?" says Fernando Vallerades, a scientist for the Spanish National Research Council (CSIC).

Watch the video above to see the protest in action.