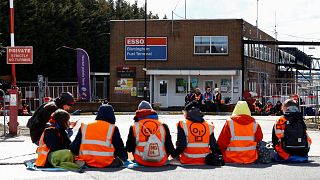 Climate change campaigners have continued protests at UK oil facilities for the fifth day in a row.

Yesterday Extinction Rebellion returned to the Esso West oil facility near Heathrow airport in London. The organisation said that it was blocking the entrance with 2 bamboo structures and around 30 people.

Since Friday, a number of actions have been staged at oil terminals and refineries across the UK. The total number of arrests since then is thought to be over 200.

Now, further action is being planned on 9 April in London's Hyde Park with people invited to join to "finally bring an end to fossil fuels."

“Climate activists are sometimes depicted as dangerous radicals. But the truly dangerous radicals are the countries that are increasing the production of fossil fuels." UN Secretary General pic.twitter.com/v827h4GUET

Extinction Rebellion, which caused days of traffic chaos in central London three years ago, organised the protests alongside another campaign, Just Stop Oil.

The UK government is 'sidelining climate policy once again'

The coalition says it will continue to block oil facilities until the government agrees to stop all new fossil fuel investments immediately.

"Right now, governments are choosing to exploit the crisis in Ukraine to hand out oil licences and continue the fossil fuel economy that’s destroying us," says Andrew Smith from Extinction Rebellion.

How long ago did our Prime Minister say COP26 was our last chance to save humanity? And now they’re sidelining climate policy once again.

He believes the UK public wants faster action on climate as the energy crisis hits saying that favouring corporate interests over the will of the people shows contempt for the people that elected them.

"How long ago did our Prime Minister say COP26 was our last chance to save humanity? And now they’re sidelining climate policy once again. This is not living in reality."

"I don’t want to be doing this but our genocidal government gives me no choice," says Louis McKecknie, one of the people taking part in the protest on 1 April.

She claims that the government knows oil is funding "Putin's war" and pushing millions of people into fuel poverty while energy companies "reap billions in profits".

"They know that to allow more oil and gas extraction in the UK is suicidal and will accelerate global heating. It means millions dying of heat stress, losing their homes or having to fight for food."

Police said they dealt with three incidents in the county of Essex, just east of London, and six people were arrested.

The protest comes amid a 'series of cascading crises'

The UK has committed to achieving net-zero emissions by 2050 but these plans have come under pressure due to the war in Ukraine. After announcing that imports of Russian oil and gas would be phased out by the end of 2022, the government has said it will now have to increase domestic production of fossil fuels.

Just Stop Oil says that the action comes "amid a series of cascading crises" including the war in Ukraine, cost of living increases and news that the climate breakdown is happening much faster than expected.

"However, while these events should prompt an emergency response to reduce UK dependence on oil and gas, the government is doubling down on drilling for new oil and gas," the group said in a statement.

Earlier this month, a Premier League soccer match was also held up for several minutes after a protestor wearing a jersey with the words "Just Stop Oil" tied himself to the goal post.

The 21-year-old activist, Louis, interrupted play for seven minutes at the Emirates Stadium.

"It was the most terrifying act I’ve ever taken. Sitting in the stadium feeling the energy of the crowd, I very nearly didn’t follow through."

After looking at the faces of the fans, he says he knew he had to take action.

"These people have been betrayed by their leaders and their government and I felt a moral duty to give them a fighting chance."