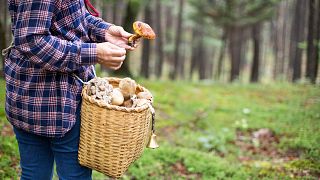 After a long dry summer, heavy rains at the beginning of autumn have provided excellent conditions for mushroom growth.

And with the cost of living so high, many people are looking for free or cheap sources of food - so foraging is more popular than ever this year.

In France, in the Pays de Gex region and neighbouring forests near Geneva in Switzerland, mushroom pickers are out foraging in the woods for their favourite fungi treats.

"Last summer we found many mushrooms in July and August. But this year it was so hot during summer we didn't find anything. But now everything is coming out at once," says Natalya Malherbe, a keen mushroom picker living in Switzerland.

We've compiled a list of five common mushrooms that can be easily identified from a photo or through a few simple tests - perfect for beginners looking to give foraging a go.

Think you you know your scaly hedgehogs from your penny buns?

You are responsible for proper identification and it is recommended you consult multiple sources before consuming.

Read herefor more information on the best places to try mushroom picking and the safety issues to consider before you set off.

The hedgehog mushroom is safe and simple to identify mushroom for beginners.

Light brown to creamy white in colour, hedgehog mushrooms grow on the forest floor and instead of gills or pores on the underside of their caps, they have very distinctive spikes.

They have a sweet, nutty flavour and are known to retain their dense texture during cooking.

Oyster mushrooms, named after their shell-life form, can be found on standing hardwood trees or logs.

They grow in groups in huge numbers and usually have a white, dusky pink, tan colour, with white/cream coloured gills.

They're one of the safest mushrooms to pick as they have no poisonous lookalikes in Europe.

You can pick these mushrooms at any time of the year, as they are not dependent on seasonal changes but rather react to weather changes.

Oyster mushrooms tend to have a mild, earthy flavour, with subtle notes of anise.

Puffballs are easy to identify - they are round spheres, with no open spore caps and measure between four to 12 inches or more.

They are mostly found on the ground in fields or in deciduous forests.

For further identification make sure to cut your suspected puffball in half - it should be completely white on the inside with no signs of gills. Avoid any that are yellow or purple on the inside.

They are described as having a rich, earthy, and nutty taste.

Penny bun mushrooms, also known widely as porcini or king bolete mushrooms, can be identified by their rich brown caps (up to 14 inches across) and sturdy pale brown/white stems (which look like baked bread rolls hence the name, penny bun).

They can be found in small clusters near trees in broad-leaved forests across Europe.

Penny bun mushrooms have a rich and meaty flavour, making them a delicious addition to soups, pasta, or risotto.

A fantastic mushroom for new foragers to look out for is the chanterelle. They're straightforward to identify due to their vivid colour, which rangers from orange-yellow to pale gold.

They can be found in mossy areas or broadleaved forests, and generally grow in the same place each year.

These mushrooms have a peppery flavour, that some people describe as slightly fruity, with hints of apricot and peach.

Now playing Next
The Kitchen

Sonic Art: Visit the gallery that puts sound at the centre of creation