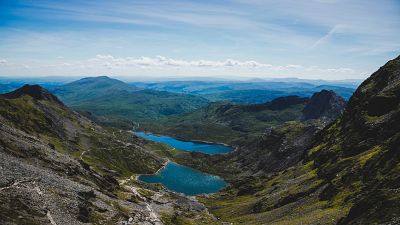 If the pandemic has made one thing clear, it's the freedom and healing that being in nature can bring. As well as the effects of not being able to be outside, in the fresh air.

Over 60% of adults said they find relief from COVID stress in nature. Whether it’s an early morning run along nature trails or lunchtime walk to the park, nature has been a saviour from the many challenges we’ve faced over the past year.

How can time in nature make travel more sustainable?

It's likely that this newfound love of nature will also prompt us to rethink how we travel - and where. For many of us, the desire to escape to nature has only heightened every time we have been confined indoors, so maybe we'll not take it for granted in future.

Many have started to question the environmental impacts of travelling, particularly in light of the pandemic. As lockdowns were announced, the staggering consequences human activity has on nature were laid bare. Be it in the emissions we produce on our daily commutes or the sheer amount of resources needed to sustain certain industries.

In 2021 and beyond, our climate change consciousness is forecast to shape the desire to explore and experience new natural environments. Luckily, there are many different options for exploring green spaces - such as national parks that encourage zero waste and sustainable travel solutions - all across Europe.

Travellers to Loch Lomond, the gateway to the Scottish Highlands, would struggle to be anything less than totally bewitched by its mesmerising beauty. From the emerald green islands to the striking woodland shores, Loch Lomond has everything a nature-loving traveller could want from a national park.

Despite its isolated feel, Loch Lomond is a lot closer to civilisation than you might think. The national park is entirely accessible by public transport, being just a 50-minute train journey from Glasgow Queen Street Station. Once you arrive, various water buses link to a myriad of sites, with adventurers able to travel to the Trossachs and Loch Katrine.

The national park has also recently committed to a ‘respect your park’ campaign, encouraging visitors to consider their own actions in keeping the site clean and litter-free. So, if you’re an eco-friendly traveller, keen to explore the iconic beauty of the Scottish highlands, Loch Lomond is definitely the place for you.

For keen hikers, this 200km trail is worthy of any traveller’s bucket list. Visitors have the luxury of exploring some of the most sublime peaks in Europe, admiring those same sites which inspired Romantic poets like Percy Shelley.

Stretching from the quaint ski village of Chamonix, through Switzerland and Italy, this route has it all: dramatic ascents and equally astonishing plunges. This route is as challenging as it is rewarding, but the reward doesn’t only come from the triumph of reaching the peaks. The trail is lined with refuges that offer much needed warmth and comfort, as well as plenty of incredible French delicacies.

The best part? The trail is completely accessible by train, using the Mont Blanc Express which serves all villages from St Gervais-le Fayet to Martigny (Switzerland) via Servoz, Les Houches, Chamonix, Argentière and Vallorcine.

Despite its name, the Saxony Switzerland National Park is located in the Elbe Sandstone Mountains on the German border with the Czech Republic, and can easily be reached by train. This is a great national park for travellers on a Europe-wide tour, as there are a variety of routes to and from the park.

The park features gorges which cut deep into the landscape, as well as masses of forests, making perfect habitats for a range of diverse species, with lynx, otters and kingfishers all being spotted along the riversides of the Elbe and in the woodlands. The national park has over 800 peaks, including the Königstein mountain, which towers above a beautifully Germanic medieval town of the same name.

As if the sites and marvels of nature weren’t enough to tempt you to Saxony Switzerland, the national park is also home to Hotel Helvetia, a bio-hotel which caters to every eco-conscious traveller’s needs. The food is all organic, and the hotel offers a commitment to renewable energy sources.

A constellation of twisting valleys and grand peaks, the Cévennes is one of France’s best kept secrets, with locals and travellers alike only just discovering the immense marvels of this national park.

The park has an outstanding reputation for biodiversity, so would be an excellent choice for travellers with a keen eye for rare plants and animal species. With an array of open-air trails tucked in amongst the swarm of oak and sweet chestnut trees, there are ample opportunities to bask in the diversity of the landscape.

Have you got a favourite national park in Europe? Let us know over on Instagram.

How to travel safely in Europe during COVID-19

This Norwegian concept could be the perfect lockdown tonic