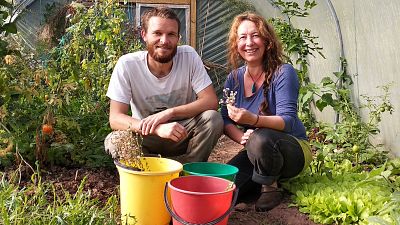 WWOOOFING involves volunteering on a farm and growing all your own food.   -   Copyright  Scarlett Penn
By Catherine Lofthouse  •  Updated: 21/09/2021

It's not just the dogs that are WWOOFing on one Macdonald's farm, thanks to a pioneering 50-year-old project that connects volunteer farmers with the land.

WWOOF - which stands for World Wide Opportunities on Organic Farms - turns 50 this year and volunteers of all ages and backgrounds are flocking to farms in more than 130 countries to reconnect with where our food comes from.

The Federation of WWOOF Organisations is even organising a weekend celebration in Lyon, France, this October to mark the half-century, with music, a farmers market, a seed exchange and stories of agro-ecological adventures.

The idea of farming in your home country has proved popular during the pandemic with an 100 per cent rise in native membership of WWOOF UK, as quarantine restrictions limited international travel.

WWOOFers receive free meals and accommodation in return for lending a hand to organic growers and farmers to learn about sustainable agriculture.

“I don't think I can go back to working inside”

One such volunteer is Heather Macdonald, 24, who has been working at Bosavern Community Farm in Cornwall alongside her partner Bea. She frequently shares what life is like as a WWOOFer on her YouTube channel.

After deciding to explore the world “rather than get a mortgage and a cat”, the politics graduate was due to fly out to the Greek island of Samos to help refugees after an earthquake in October, when she was struck down by coronavirus. The irony of working for months as a healthcare assistant on a COVID ward in Manchester, only to fall sick on the day she was meant to fly to her new job, does not escape her.

But the turn of fate which kept her in the UK meant the couple was able to harvest vegetables and look after chickens in Cornwall instead.

There's something important and special about planting something, growing it, eating it and it sustaining you.

"I don't think I can go back to working inside. We're outside all day getting fresh air and sun. I used to work in a hospital that had windows that didn't open and all the PPE. Going from that to this is so good, rewarding and refreshing,” says Heather.

“I've realised how much we rely on the wonderful people producing our food and I've been interested to see what it's like to live in a way that's sustainable.”

She continues, “there's something important and special about planting something, growing it, eating it and it sustaining you. We've just come out of the hunger gap in Britain where we rely on imported food between April and June, because everything's been harvested and other crops have been planted but are still growing."

Becoming a farmer for the day

As well as a small team of volunteers living in the farmhouse, the farm also welcomes local people for the day to grow and harvest crops.

It sells its produce in the farm shop and in vegetable boxes delivered to homes, schools and businesses in the area.

"It was a real lifeline for locals to come here when they were furloughed or fired or businesses were closed down and they've still stayed even when things have opened back up,” explains Heather.

For the live-in volunteers, accommodation and food are paid for.

But not all WWOOFers want to sign up for communal living and all that entails, some prefer to live a quieter life.

Finding the right farming experience is simply a matter of putting in key words into the WWOOF search engine and looking for what you want, says Heather.

Volunteers can be individuals, couples or even families and can work on farms of different sizes with different purposes.

Before arriving in Cornwall, Heather and Bea worked on a farm that specialised in trees in Cheshire.

But being in the West Country gave them the chance to be part of the Extinction Rebellion activism at the G7 summit in St Ives. Heather describes the protests as a mix between a celebration of life and the absolute panic of trying to make people aware of the immediate change that needs to happen in the world.

Life on the farm can be taxing though.

For Heather, heavy outdoor labour might not seem the obvious choice of job, given that she had major surgery to correct scoliosis as a teenager. Even now, she has to be aware of the demands that physical activity can place on her spine.

Working outside is one of the best things you can do - so good for physical health.

But she says, "working outside is one of the best things you can do - so good for physical health. I'm very lucky that it doesn't stop me." She adds that it's important more outside spaces are made accessible for people after surgery or those with physical limitations.

To celebrate its 50th year, the WWOOF international community has launched #growWWOOF, a fundraising campaign to create one online platform where volunteers and hosts from across the world can connect, instead of needing to create different accounts for each country.

The original eco-tourism organic farming movement is jetting off into its next 50 years, in the hope of making the world a better place.