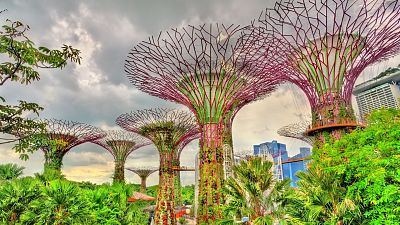 Since gaining independence in 1965, Singapore has transformed itself to a city famed for its green innovation.   -   Copyright  Canva
By Marthe de Ferrer  •  Updated: 11/11/2021

As a small, heavily built-up urban island, you’d be forgiven for expecting that Singapore is little more than swathes of concrete.

Occupying only 700 square kilometres, yet home to over 5.7 million people, it is the second most densely populated country on the planet - only ranking behind Monaco, which has a mere 40,000 citizens in comparison.

But Singapore isn’t a concrete jungle, far from it in fact. The city state is instead an extraordinary lesson for the rest of the world on how to seamlessly blend urban living with nature.

From uncontrolled urbanisation to rapid rewilding

Since it was first colonised by the British in 1819, and Singapore was formally founded, more than 95 per cent of the island’s vegetation has been cleared. The speed at which the state grew, both in terms of infrastructure and population, was so rapid that it lost its flora and fauna at a rate unlike any other nation.

In 1967, two years after Singapore became independent, plans were launched to transform the nation into a ‘garden city’, designating land to become natural reserves.

But green space wasn’t the only issue the city faced. Air pollution was becoming a rising issue, to the extent that in 1996 the country had one of the highest emission levels on the planet.

In the early 1990s the Singapore Green Plan (SGP) was created, and then re-established ten years later in 2002 as the SGP 2012. It focused on three key areas:

The aim was to redress the issues Singapore faced by 2012, through educational outreach, awareness campaigns, and changes to infrastructure.

A huge part of this plan was about reclaiming green space and finding innovative ways to rewild the city - which is how Singapore has become known as a ‘biophilic’ city.

What is a biophilic city?

The word ‘biophilic’ means a love of nature and the natural world, coming from bio- (life) and -philia (friendly towards). An organisation called Biophilic Cities exists to work with cities around the world to achieve accredited status and recognition for their work blending nature into urban planning.

“These partner cities are working in concert to conserve and celebrate nature in all its forms [...] from biodiversity to wild urban spaces present in cities,” explains the Biophilic Cities website.

“We acknowledge the importance of daily contact with nature as an element of a meaningful urban life, as well as the ethical responsibility that cities have to conserve global nature as shared habitat for non-human life and people.”

Singapore has been a member of Biophilic Cities since 2013, no doubt thanks to the work done throughout the country to rewild the island.

Much of Singapore’s regeneration was led by Dr Cheong Koon Hean, who headed the nation’s urban development agency. Part of her work was running an incentive programme to encourage building companies and property owners to install rooftop gardens and vertical plant walls.

Since 2009 this scheme has retrofitted over 100 buildings with green roofs, edible gardens, recreational rooftop gardens, and verdant green walls. This has not only helped improve the city from an ecological perspective, it’s also established Singapore’s unique and distinctive aesthetic.

This added greenery has helped mitigate the urban heat effect, while also improving the air quality as the plants act as air purifiers and filters.

Cheong hopes that Singapore will continue to be green, both in terms of building efficiency and through incorporating greenery in the designs. But she also believes it can serve as a blueprint for other cities to learn from.

“Many cities, especially those in Asia, are densely populated,” she told National Geographic, “but our experience shows that those cities can be liveable.”

As the coronavirus pandemic continues to show us all the importance of nature in our lives, Singapore stands out as an example of how we can make our own cities truly green.