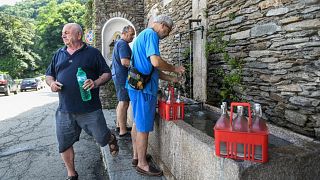 Europe is facing one of its driest summers ever.

Brutal heatwaves have swept across the continent, wildfires have torn through the land and rivers are drying up.

And, after a winter with little rainfall was followed by record high temperatures in some countries, millions of people are now facing the consequences of severe drought.

For some, it is taking the form of minor hosepipe bans or empty swimming pools. For others, the impact on their daily lives has been far more extreme.

At the end of July, Spain's reservoirs were at just 40 per cent capacity. The country is facing its driest climate for at least 1,200 years, according to a recent article in the journal Nature Geoscience.

For the roughly 800 people who live in the village of Bonastre, just south of Barcelona, drought has caused their taps to run dry.

Severe restrictions have been put in place with reservoir levels even lower than the national average. Residents only have access to water from 7:00 to 10:00 and 20:00 to 23:00 each day.

“We have in theory four hours of water per day,” says 43-year-old Mario Ferrario who owns a printing shop in the village.

“I take my daughters early in the morning to summer school and we don't have water.”

If he’s lucky, he can have a shower when he gets back. If not he has to wait until the evening or even the next day.

“And that's if there is water again because often the schedules are not followed. They [local authorities] set up a timetable and then change it without warning us.”

An extreme year for Bonastre, Spain

Mayor of the village, Ester Barta, has described the situation in Bonastre this year as particularly “extreme”. The well that provides the village with water is supplied by the Gaià aquifer where the effects of drought have been apparent for months.

At first, the council asked people to be responsible with their usage and started restricting the flow of water at weekends. Since then, things have got progressively worse. On a few occasions, water has been shut off for entire days to try and help supplies recover.

For Mario, it means everyday tasks like washing clothes or cooking dinner for his two daughters have become a luxury. Though residents try to store water when there are no cuts, if they forget, they are left with nothing.

The previous summers we had access to a bit more water, but this one has been catastrophic.

“People are quite angry with the situation in general because it's not the first time it has happened,” he says.

The residents of Bonastre are tired and Mario explains that local politicians have done little to help. He has lived in the village for four years and water restrictions have been brought in for the last three. This year though, the situation is much worse.

“The previous summers we had access to a bit more water, but this one has been catastrophic. The restrictions are much more severe than in previous years.”

Struggling to keep cool without water

The extreme heat is making it even harder to cope as people struggle to keep themselves cool. More than 1,000 people died during July’s unprecedented high temperatures, according to Spain’s Ministry of Health.

“There are people whose situation is much worse than mine because they don't have a well, and with the heat, it's impossible to cope without water,” says Núria Pons who also lives in Bonastre.

With the heat, it's impossible to cope without water.

“They are having a hard time because we spend most of the day without water. There is a water tank in the village brought by the town hall but there are elderly people who can't go up and down carrying jugs of water.”

The town hall has blamed villagers for not using water in a responsible way but Núria says this is a familiar excuse.

“This is what all the local authorities always say. Sure, you can find people who don't care about anything and are not very supportive, but it is not the case in the majority of the population.”

Those that use the most water, she believes, are the people with summer homes in the village who only visit between July and August. The increased demand only makes the situation in Bonastre worse.

In Italy, the northern regions are facing the worst water crisis in 70 years. Some provinces have come close to running out of water for growing food altogether.

Ferrara in the Emilia-Romagna region is not usually affected by hot summer conditions due to a network of canals that supply its fields. But this year, extraordinary measures are needed here too with levels in the Po River falling to a record low.

The Ferrara Land Reclamation Consortium has just installed more than 20 temporary pumps that aim to “recycle” water heading for the ocean. The pumps carry millions of litres a day back to the irrigation ditches that feed the fields.

This kind of intervention has never been done before, but it has been filling the channels left empty by the rapidly drying river. Now, however, supplies are so low that even new ideas can’t keep the water flowing.

"Such extraordinary solutions are essential in times of extreme difficulty, but the whole system has been at the limit for several weeks,” stresses Stefano Calderoni, President of the Ferrara Land Reclamation Consortium.

Something very small could now tear down the entire defence system that the Consortium has put in place, he adds.

"The water crisis is no longer just an emergency but is becoming a real structural condition, requiring massive public interventions. The 2022 emergency must become an opportunity to secure the country and the territory, overcoming the divisions of politics."

It isn't just northern Italy's farmers feeling the impact of severe drought either. Producing food has become difficult in other parts of the country - even for those looking to fill their own fridges.

Chiarina Arguti, 75, lives in a countryside suburb of Foligno in the central Italian region of Umbria. Her house belonged to her grandmother, who bought it with money the state gave her after her husband died in World War I.

"We have a one-acre field, only part of which is used; when my husband was there it was used entirely," Chiarina explains.

"Rationing has not been done until now because there are no specific regulations, we do not have irrigation problems because we have the well, which does not contain drinking water."

The problem is mainly that of high temperatures and lack of rainfall.

"Last year I made 100 jars of tomato sauce, this year it is about half,” Chiarina says.

“So many vegetables can't be used, or they just don't grow."