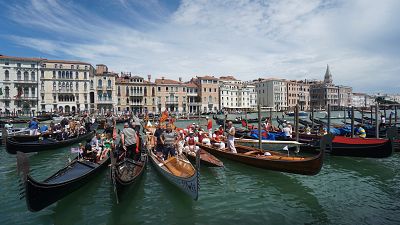 Greenpeace activists in Venice staged a protest at the weekend to highlight the catastrophic effects greenwashing could have on the lagoon city.

Demonstrating on wooden rowing boats, the protesters warned that the city will soon be submerged if the fossil fuels industry continues what the activist group calls its greenwashing agenda.

On Sunday, Greenpeace activists staged the “last tour of Venice” in an ironic protest against the greenwashing of the fossil fuels industry.

Sailing on traditional boats past some of Venice’s world-famous landmarks, including St. Mark's Square and the Bridge of Sighs, the protesters warned against misleading advertising by fossil fuel companies.

Demonstrators carried banners with logos of major European oil and gas companies who they say had “sponsored” the final tour of the city.

Greenpeace is currently calling for a new law that bans fossil fuel advertising and sponsorship in the European Union. They warn that adverts portraying energy companies as environmentally friendly promotes false solutions and delays climate action.

Federico Spadini, a Greenpeace climate campaigner, said companies were using advertising to “clean up their image, just like tobacco manufacturers did in the past.”

Researchers found that almost twothirds of the oil companies' advertisements could be classed as greenwashing. They say the messages misled consumers by representing false solutions to the climate crisis.

How could greenwashing sink Venice?

The Greenpeace activists took to the water to warn that Venice’s problems with flooding would be exacerbated if action isn’t taken against greenwashing. The historic centre, which is a UNESCO World Heritage Site, is extremely vulnerable to flooding due to climate change and rising sea levels.

This would require the mobile flood barriers in the lagoon to be raised so many times it would severely damage the ecosystem and the port’s economy.

A study by the Intergovernmental Panel on Climate Change in 2021 predicted a possible sealevel rise of 63cm-101cm in the most drastic case. This would require the mobile flood barriers in the lagoon to be raised so many times it would severely damage the ecosystem and the port’s economy.

As Spadini said, “If we don’t embrace a green energy transition, the last tourist trip to Venice could soon become a tragic reality.”