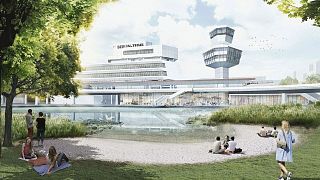 Ever wanted to live in an airport?

In the 2004 movie ‘Terminal’, protagonist Viktor Navorski - played by Tom Hanks - does just that.

Eco-conscious German property hunters now have the chance to do the same, albeit in far more comfort and style.

The former airport will also house an industrial park and research area called The Urban Tech Republic. Alongside 1,000 businesses, this area will include a campus for Berliner Hochschule für Technik University.

Construction will start in 2023, with the initial parts of both projects due for completion by 2027.

Will the Tegel airport redevelopment be green?

Filled with carbon-spewing planes, airports are hardly known for their environmental credentials.

But in its new form, the Tegel will set a benchmark for eco-friendly living.

Designed to be walkable and cyclable, the largely-pedestrianised community will put bikes before cars. Electric buses and a tramway are slated as future developments.

Each rooftop is to be fitted with solar panels for domestic electricity, while ‘sponge city’ technology like permeable pavements and rain gardens will help the city soak up as much water as possible. Nearly half of the vast airport plot will be set aside as a nature reserve.

The project will form a “blueprint” for other eco initiatives, a press release by the state-owned development company declares.

“The former Berlin-Tegel Airport is making room for Berlin,” they say.

“Berlin TXL – The Urban Tech Republic is a unique initiative in Europe at the present time, if not in the whole world.”