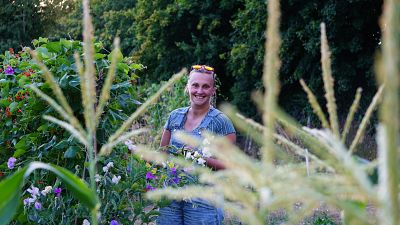 It’s national allotment week in the UK, and allotmenteers are celebrating the same way they do every day of the summer: tending to and enjoying the bounty of their plots.

There are around 330,000 allotments in the country: small pieces of land rented by individuals from local authorities, known as ‘jardins familiaux’ in France and ‘schrebergarten’ in Germany.

Another 100,000 people are on council waiting lists (according to data released last autumn) and many more curiously eye the green quilts from train windows and wonder what it would be like to grow their own food.

Given the significant fall in crop yields across Europe due to heatwaves and drought - EU tomato production, for example, is expected to drop by 9 per cent this year - growing our own food has never been more valuable.

In their small but meaningful way, allotments are helping to ease the cost-of-living crisis for those lucky enough to have one, or to have a community-run plot nearby. But the social and ecological benefits are priceless, as we found from speaking to some passionate allotment holders.

Why allotments are community builders

When Joanna Dobson, 62, and her partner were moving house in Sheffield, they drew a circle around their allotment on a map. Having waited six years to get the plot, they weren’t about to give it up.

There’s 133 plots at the site in south west Sheffield, a sprawling network of plants and people.

There’s something about the fact that we share this land and we have this common interest that I think is really important.

“We know them on the allotment but not off it,” Joanna says of her neighbours. “The guy who’s got the plot next to ours - whenever I see him we’ll have a really good conversation and set the world to rights. But I wouldn’t know how to get in touch with him outside of the gardening sessions.”

She has a friendly arrangement with the lady on the other side - they’ll water each other’s greenhouses when they’re on holiday - but don’t text about anything else.

“And yet,” she says, “I would say that those relationships are really important. There’s something about the fact that we share this land and we have this common interest that I think is really important. It’s quite hard to quantify but you sense that it’s a supportive community.”

Last year a much-loved and “quirky” allotment holder, Eric Pye, sadly died, and people placed jars of flowers by his self-built shed. They joined an otherwise busy patch; Eric was famed for his scarecrows and thrifty ways, constructing vegetable supports out of curtain poles and towel rails.

“I doubt that any of us had talked to Eric about much more than how our potatoes were doing,” says Joanna, “but somehow it means so much more than that.”

The shared endeavour provides some humour - such as when the WhatsApp alert went round that there were squirrels on Beverley’s sweetcorn - but it’s not always fun. “It’s disheartening as well,” adds Joanna, “when you’re picking slugs off strawberries at 10pm and you feel like they’ve had more than you, or when the weather’s really bad.”

Increasingly, she’s found that sudden changes in the weather cause her mood to plummet. “It’s not any one thing, it’s that you can’t predict the weather anymore.” Spring came early in 2019, sending the strawberries out. But a 23C weekend was followed by a chilly 9C and most of the fruit was lost.

“It made the whole climate crisis much more immediate, which I suppose in a way it should be - we should actually be in touch with it, but it was quite hard to live with for a bit.”

The seasonal rhythm may be off kilter, but in her own life Joanna appreciates that the allotment “dictates a rhythm of life.” As a PhD researcher with a partner who also works full time, the plot provides a meeting point for the couple after long working days at home. On top of the social, mental and physical health benefits, she feels that the allotment is a place that “unblocks” her as a writer. At the allotment, “I can always find something to write about.”

In Wiltshire, 30-year-old Hayleigh Cubitt was among a wave of people who signed up for an allotment during lockdown. Two years later, she and partner Ben Watkinson got a 10 by 10 metre plot just down the road in Corsham.

“It’s a really lovely community,” she says. “Everyone is so approachable and just wants to share what they know. When we first got the allotment [in April] we were hardly able to do any work because every 20 minutes a new person would come up and introduce themselves.”

Allotment holders tend to be older; a government survey from 1998 found that only 6 per cent were aged under 35, with most over 65. But 20 years on, that demographic seems to have changed. In Corsham, there's been an “influx” of younger plot holders on the site this year, at least partly down to the lockdown effect.

The hours get sucked away when you’re at the allotment.

The 2020 resurgence led many commentators to hark back to World War Two - a boom time for kitchen gardens when the government declared ‘digging for victory’ everyone’s patriotic duty.

“It’s so rewarding to grow your own food,” says Hayleigh, who works for the Environment Agency. “The hours get sucked away when you’re at the allotment, just pottering around and chatting to people and researching all your different vegetables and doing a bit of weeding.

Can allotments help combat the cost of living?

With UK farmers lamenting the withered harvest of the heatwave - and struggling to water their parched fields - it makes sense for allotmenteers to be investing their time and energy on this smaller scale. Supermarket supplies have not been hit so far this year as they had already signed contracts with growers, but there’s less to go around with some products like berries cooked in the heat.

“I’m really aware of how much everything that I’m growing costs in a shop and I’m very conscious of not wasting it all,” says Hayleigh. Some councils are splitting allotments in half to cut down on waiting lists, but this can be limiting for growers.

“I feel more passionately than I used to about the kind of inequalities in our food system,” says Joanna. “The fact that some people can’t even buy fresh vegetables, let alone grow their own… increasingly, I find that one of the biggest injustices of the society we live in.”

The village cooking up a community lunch from its allotment

One woman who is working an allotment on behalf of the community is Juliet Frost, 61, in Purley on Thames. As vice chair of the village’s sustainability group, a garden designer and botanist, she is running the plot to “teach people about growing vegetables organically, about food security, and also just to teach some of the children in the village about where food comes from.”

The cost-of-living crisis has given it a sharper imperative, and next month the group is hosting a free community meal at the allotment. They’re also raising funds to install a fridge and some shelving at the local community cafe; the ‘Purley Pantry’ will be a vital corner for people to help themselves to excess food and meals.

The cost of allotments varies considerably. Juliet’s community one is only £25 a year, Hayleigh and Ben pay £46 and Joanna’s is around £170. For some families, facing soaring energy bills and other inflated expenses, she notes that will obviously be prohibitive.

How can you run an allotment in a wildlife-friendly way?

Allotments do more than just put food on your plate, and among the gardeners there’s a real delight in experimentation. “Next year we want to try and grow some rare, weird vegetables that you can’t really buy, and to be able to do that, to have the space to do that, is brilliant,” says Hayleigh.

Making space for nature is part of this creative thinking. The couple are keeping an area “slightly wild” for flowers and pollinators - which the National Allotment Society would surely approve of. This week’s theme is ‘Bugs, Bees and Broccoli’, highlighting the importance of gardening with nature in mind.

Juliet is well versed in this, and has plenty of tips for dealing with creatures of all sizes. “Our biggest challenge at the moment is a mole,” she says, “and I’m determined not to have a mole scarer, so we’ve had to put things up into pots and raise the beds a bit, and he just tunnels underneath.”

The basics of being organic, she explains, are “good feeding, no stress, little strategies to make sure that you’re not at peak cropping at the same time as other people so that the pests can’t keep up with you.” With some initial funding from the Soil Association, the group bought some soil improver from a farm digester, and are experimenting with dig and ‘no dig’ parts of the plot.

With so many returns from a small patch of soil, it’s no wonder that allotments hold a special place in their tenants’ hearts. As Hayleigh adds, “Time just disappears and you don't realise how long you’ve spent down there and you never leave feeling rubbish.”