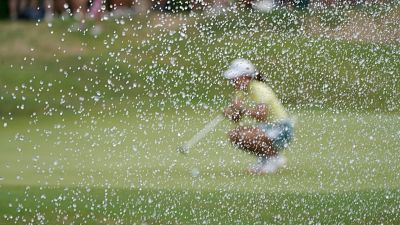 Amid one of the worst droughts on record, water bans are hitting French citizens and businesses hard - yet golf courses have been granted an eyebrow-raising pass.

While homeowners in the worst-hit areas are forbidden from watering their gardens, golf course owners may still water their greens.

Why are activists targeting golf courses in France?

Due to persistent drought, France has told residents to avoid non-essential water usage like car-washing and watering gardens. However, activists complain that golf courses are allowed to continue watering greens.

Extinction Rebellion Toulouse posted a photograph on Twitter apparently showing a golf hole filled with cement and a sign saying "This hole is drinking 277,000 litres. Do you drink that much? #Stop Golf".

The protest action took place at the Vieille-Toulouse club and also at the Garonne des Sept Deniers course.

Defending their exemption from the water restrictions, Gerard Rougier of the French Golf Federation told the France Info news website, "A golf course without a green is like an ice-rink without ice."

How is France dealing with water shortages?

France has been one of the hardest hit by the hot and dry conditions across Europe with firefighters battling a "monster" blaze in forests in the southwest.

After experiencing water shortages during the country's second driest month on record, prefects (regional representatives) are limiting water usage according to the level of severity.

Nearly all of the country’s 96 departments have imposed water use restrictions, also a record.

The French Ministry of Ecology has defined four levels of drought warnings ranging from ‘vigilance’ to ‘crisis’.

During the drought, more than 100 French towns have been left without drinking water in their pipes, leading to the need for water trucks. The situation has been described as “historic” by the Minister of Ecological Transition, Christophe Béchu.

Why are golf courses exempt from the water bans?

Golf course owners are allowed to water their teeing areas and greens, even in ‘crisis’ areas.

The only constraints are that watering must be carried out during nighttime hours, and “reduced to the strict minimum” of no more than 30 per cent of the usual volume.

Course owners benefit from an agreement signed between the French Golf Federation and the Ministry of Ecological Transition in 2019. In return, they have committed to reducing their water consumption.

On average, it takes 25,000 cubic metres of water per year to tend to the lawns of the more than 700 courses in France.

On average, it takes 25,000 cubic metres of water per year to water the lawns of the more than 700 courses in France.

Some officials are indignant about the exceptions. Éric Piolle, the mayor of Grenoble city in southeastern France, tweeted that “the practices of the richest” continue to be “protected.”

Water bans are enforced at the discretion of regional officials and so far only Ille-et-Villaine in western France has banned the watering of golf courses.

Keen to preserve its award-winning flower beds, the town of Colmar, close to the border with Germany, has requested its own exemption.

The request was resisted by some locals. “Flowers and grass cannot be eaten. The city of Colmar is asking for a watering exemption to maintain its standing as a 'flower city' while farmers and private individuals are not allowed to water wheat or vegetable gardens... it's just indecent,” said one user on Twitter.

Christian Meistermann, the deputy mayor in charge of roads, explains and justifies the approach: “The environmental and tourist capital of Colmar is also these flowers, we can't let this capital die.”

On the Côte d'Azur, too, people are worried about the water ban’s impact on local heritage. Menton’s town hall fears for its famous lemons.

“The complete cut-off of watering will make an exceptional heritage disappear and will have a considerable cost for the community,” warns the town in its letter addressed to the prefect of the Alpes-Maritimes to request an exemption. For the time being, the request has gone unheeded by the state.