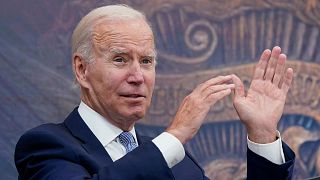 Biden has said the new deal could be the 'most significant' climate legislation in US history.   -   Copyright  AP Photo/Susan Walsh
By MATTHEW DALY  with AP  •  Updated: 29/07/2022

An unexpected deal reached by Senate Democrats would be the most ambitious action ever taken by the United States to address global warming.

It could help President Joe Biden come close to meeting his pledge to cut greenhouse gas emissions in half by 2030, experts said on Thursday as they sifted through a massive bill that revives action on climate change. It comes just weeks after the legislation appeared dead.

The deal stunned lawmakers and activists who had given up hope that legislation could be enacted after West Virginia Senator Joe Manchin said he could not support the measure because of inflation concerns.

Clean energy tax credits and other provisions in the 725 page bill could "put the US on track to reducing emissions by 31 to 44 per cent below 2005 levels in 2030,'' according to an analysis released late Thursday by the Rhodium Group, an independent research firm.

Additional action by the Biden administration and Democratic-controlled states could "help close the rest of the gap to (Biden's) target of a 50 to 52 per cent cut in emissions by 2030,'' said Ben King, the group's associate director.

Will this 'historic' climate bill be approved in the US?

Approval of the bill is far from certain in the US Senate, which is split 50-50, where support from every Democrat will be needed to overcome unanimous Republican opposition. Democratic Senator Kyrsten Sinema from Arizona forced changes in earlier versions of the plan but declined to reveal her stance Thursday.

In the narrowly divided House, Democrats can lose no more than four votes and prevail in the vote.

"We will improve our energy security and tackle the climate crisis — by providing tax credits and investments for energy projects,'' he said in a statement, adding that the bill "will create thousands of new jobs and help lower energy costs in the future.''

"This bill would be the most signification legislation in history to tackle the climate crisis and improve our energy security right away," the President said on Thursday.

Passing this bill sends a message to the world that America is leading on climate.

"Passing this bill sends a message to the world that America is leading on climate and sends a message at home that we will create more great jobs for Americans in this industry,'' added Zichal, a former energy adviser to President Barack Obama.

Tiernan Sittenfeld, senior vice president of the League of Conservation Voters, summed up her reaction in a single word: "Wow!"

Senator Tina Smith from Minnesota tweeted that she was "stunned, but in a good way.''

Manchin, who chairs the Senate energy panel, insisted that he had not changed his mind after he told Senate Majority Leader Chuck Schumer two weeks ago that he could not support the bill because of inflation concerns.

"There should be no surprises. I've never walked away from anything in my life,'' he told reporters on a Zoom call from West Virginia, where he is recovering from COVID-19.

Manchin said called the bill an opportunity "to really give us an energy policy with security that we need for our nation" while also driving down inflation and high gasoline prices.

Incentives for Americans to switch to green alternatives

The bill, which Manchin dubbed the "Inflation Reduction Act of 2022," includes $300 billion (€293 billion) for deficit reduction, as well as measures to lower prescription drug prices and extend subsidies to help Americans who buy health insurance on their own.

Besides investments in renewable energy like wind and solar power, the bill includes incentives for consumers to buy energy efficient appliances such as heat pumps and water heaters, electric vehicles and rooftop solar panels.

Even with the restrictions, the credits should help stimulate already rising electric vehicle sales, said Jessica Caldwell, senior analyst for Edmunds.com. Electric vehicles accounted for about 5 per cent of new vehicle sales in the US in the first half of the year and are projected to reach up to 37 per cent by 2030.

The bill also invests over $60 billion (€71 billion) in environmental justice, including block grants to address disproportionate environmental and public health harms related to pollution and climate change in poor and disadvantaged communities.

Beverly Wright, executive director of the Deep South Center for Environmental Justice, called the bill a step forward. But said she was concerned about tax credits for "polluting industries" such as coal, oil and gas.

"We need bolder action to achieve environmental and climate justice for ourselves and future generations,'' she said.

The planet is on fire. This is enormous progress. Let's get it done.

Brian Schatz
US Senator from Hawai'i

The bill would set a fee on excess methane emissions by oil and gas producers while offering up to $850 million (€1 billion) in grants to industry to monitor and reduce methane.

"The planet is on fire. This is enormous progress. Let's get it done."

Not all everyone is celebrating this 'historic' US bill

The deal includes promises by Schumer and other Democratic leaders to pursue permitting reforms that Manchin called "essential to unlocking domestic energy and transmission projects". This includes a controversial natural gas pipeline planned in his home state and Virginia.

More than 90 per cent of the proposed Mountain Valley Pipeline has been completed, but the project has been delayed by court battles and other issues.

The pipeline should be "at the top of the heap" for federal approval," Manchin said and is a good example of why permitting reform is needed to speed energy project approvals.

Manchin, a longtime supporter of coal and other fossil fuels, said environmental reviews of such major projects should be concluded within two years, instead of lasting up to 10 years as under current practice.

"Other countries around the world — developed nations — do it extremely well, and they do it in a very short period of time. We should be able to do the same,'' he said.

While permitting reforms would be considered in separate legislation, the budget deal would require the US Interior Department to offer at least 2 million acres of public lands and 60 million acres of offshore waters in the Gulf of Mexico and Alaska for oil and gas leasing each year.

If it fails to offer minimum amounts for leasing, the department would not be allowed to grant approvals to any utility-scale renewable energy project on public lands or waters.

That requirement "is a climate suicide pact," said Brett Hartl, government affairs director at the Center for Biological Diversity, an environmental group.

"It's self-defeating to handcuff renewable energy development to massive new oil and gas extraction,'' Hartl said, adding that new fossil fuel leasing required under the bill would "fan the flames of the climate disasters torching our country.''

An oil industry group has also blasted the bill as punitive and inflationary.

"We are very concerned about this bill's potential negative impact on energy prices and American competitiveness, especially in the midst of a global energy crisis and record high inflation," said Anne Bradbury, CEO of the American Exploration and Production Council, which represents independent oil and natural gas companies in the US.