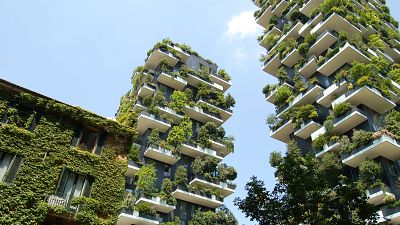 As the global population steadily increases it becomes significantly more likely that most of us will end up living in a busy, urban area at some point in our lives.

Cities can feel close and claustrophobic leaving you craving fresh air under a green canopy, especially in the middle of a heatwave. It undoubtedly feels good to get out of the urban sprawl and catch a break from the oppressive warmth and the positive effects of greener cities on our health are measurable.

Research from the University of East Anglia found that having access to green spaces can reduce your risk of type II diabetes, cardiovascular disease, premature death, preterm birth, stress and high blood pressure. This is pretty significant for global health as more than one of these illnesses can be found on the World Health Organisation’s top 10 causes of death.

By 2030, urban areas could provide a home for 60% of the world’s population with one in three people living in a city housing over half a million inhabitants, according to the United Nations. An increase in population density means that green spaces are frequently sacrificed to build more homes. It makes cityscapes all the more uninviting, widening the gulf between rural and urban living.

Aesthetics aside, when looking for solutions to pollution, smog and rising temperatures, scientists are increasingly finding that plants and trees could provide be the answer. Urban living of the future will hopefully see many more attempts to make cities more healthy places to live using unconventional means like green walls and roof gardens.

Instead of treating the rural and urban as vastly different environments, our relationship with where we live needs to change to blur these artificial boundaries.

The link between green spaces and life expectancy

So, how much greener do our cities need to be to benefit our health? After taking a look at 9 major studies, Lancet Planetary Health found that a relatively small increase in the green spaces surrounding your home could have an impact on your life expectancy. Researchers collated information from 8.3 million people across 7 different countries and found that a 10 per cent increase in greenery led to a 4 per cent decrease in early death on average.

The greenness of areas was measured using something called the “vegetation index”. On this scale, an arid desert would score 0 whilst a lush tropical rainforest would be 1; increasing this index by just 0.1 improves early death rates for people who live within 500m. Although the study didn't explicitly look at why more trees might make you live longer, the possibility that surrounding yourself with greenery could add years to your life is compelling.

Alongside other plans to make Paris a more sustainable place, Mayor Anne Hidalgo, announced a tree planting scheme last year with the goal of creating an “urban forest”. At four iconic sites, the city will create “islands of freshness” intended to counter the bubble of heat generated by its inhabitants that encloses most urban environments. The city hall is planning to have 50 per cent of Paris covered by planted areas by 2030, a goal that will require every free centimetre to be utilized from verges to public squares to roofs.

In the UK, the government has also committed to regreening cities across the country. A £10 million plan announced last year will see 130,000 trees planted in towns and cities from London to Aberdeen. Then Environment Secretary, Michael Gove, called trees “vital in the fight against climate change” as he launched the fund.

Helen Griffiths, Chief Executive of Fields in Trust, told euronews Living "Our research found that parks and green spaces generate £34.2 billion worth of physical and mental health benefits each year. It’s a persuasive statistic, as is the fact that £111 million worth of NHS savings are made annually in reduced GP visits alone, because frequent park users have better general health and are less likely to visit their doctor."

Among the studies highlighted by The Lancet paper are a few those show trees, in particular, are great at reducing air pollutants. They also help to minimise the effects of noise and heat from heavy city traffic.

Once known as a "city in a forest", Atlanta in the United States provides a good case study for the effects of regreening. Between 1973 and 1999, over 225,000 hectares of trees were cleared to build shopping centres, roads, and rows of identical suburban housing. Losing this dense tree cover led to a third more water running off the streets and into drains during storms, increasing the chances of damaging floods and making costly preventative measures necessary.

Tree cover also reduces temperatures as shade keeps the sun off of the highly reflective materials that make up urban buildings. In stopping cities from becoming "urban heat islands", or areas where the air temperature is 1 to 4 degrees celsius higher than in surrounding rural areas, the study of Atlanta found that trees reduced summer energy usage. By reducing the amount of air cooling needed by the city's residents, the area's energy use would be slashed and emissions cut by nearly 600,000 tonnes of CO2. That's the same as taking 127,389 cars off the streets for a whole year.