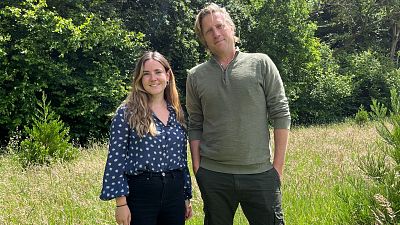 I never thought I would be able to offset the carbon footprint of my whole lifetime, in one day. Until I met Henry Emson.

Henry runs a pioneering project called 'One Life, One Tree', where ordinary people can plant giant sequoias in England and Wales.

Giant sequoias are the oldest trees in the world. They're the fastest growing coniferous species and can live anywhere from 250 to 3,000 years.

They grow very tall and very wide too, with the widest sequoia standing at over 9.5 metres - that’s about two Toyota Priuses side by side.

Sequoias sequester more carbon than any other species.

But crucially, when it comes to nature’s carbon capture, no other tree comes close. Sequoias sequester more carbon than any other species.

That’s why Henry created ‘The Great Reserve’, a series of protected areas around the UK where these majestic giants can flourish. His home country was perfect because the climate allows them to survive the stresses of global climate change.

I was wrong about where sequoia trees can thrive

Before meeting Henry, I had always thought giant sequoias only lived in the humid climes of California, where they dwarf their surroundings.

I was right - giant sequoias are endemic to California. They only grow naturally in groves on the western slopes of the Sierra Nevada mountain range.

But they're now endangered, landing them on the IUCN red list. Due to devastating wildfires in California over the last few years, we’re losing 10 per cent of them every single year.

‘Sequoiadendrons’ (their official name) can be traced all the way back to the Triassic Period, 200 million years ago, when dinosaurs first roamed. But today, only around 75,000 remain.

It’s this sad fact that inspired Henry to branch out from his day job at a B Corp-certified tech company to start ‘One Life, One Tree’. His ultimate aim is to plant 100,000 giant sequoias in the UK by 2030.

Henry compares sequoias to the millions who are likely to be displaced by the climate crisis, “They’re effectively like climate refugees - we help them with assisted migration,” he explains.

Through propagation (the dispersion of seeds in order for more plants to grow), giant sequoias can in fact survive - and thrive - over here in the UK.

Crucially, it’s a non-invasive species so it doesn’t pose a risk to existing native trees. On top of that, Henry plants three native trees around every sequoia to prevent monocultures and promote local biodiversity.

The benefits are immense.

The British countryside is populated with lush green conifers, planters get the satisfaction of knowing they’re offsetting their carbon emissions and they’re saving a species from the risk of extinction by giving it a new home.

Where did the idea to plant giant sequoias in the UK come from?

When he became a father 7 years ago, Henry was worried about the impact his children’s lives would have on the planet. So he set about finding a way to offset the whole family’s emissions.

After some extensive research, he discovered that planting giant sequoias was the most effective, accessible solution he had at his disposal.

Rather than sending money off to a (often questionable) carbon offsetting scheme which plants trees in a (often undisclosed) location around the world, he thought, why not plant my own?

Henry now dedicates his life to buying land in regions optimal for sequoia trees to flourish, from Buckinghamshire in England to Brecon in Wales.

Individuals pay for their own sapling and either come and plant it themselves, or Henry and his team will plant it for them.

Saplings are not cheap, costing around £400 (€465), but the money generated goes towards purchasing more land to plant sequoias and to pay for forestry and land maintenance.

The team even uses drones to generate the exact location of each tree, so that every person has their own GPS coordinates and can go back to visit.

We need more General Shermans in the world

The oldest living giant sequoia is called General Sherman. He lives in the Giant Forest of Sequoia National Park in Tulare County, California, and is estimated to be 2,200 to 2,700 years old.

General Sherman will suck up around 1,400 tons of CO2 in his lifetime. An average person in the developed world generates about 520 tons in 80 or so years, so this one tree is offsetting the footprints of nearly three people.

Trees are the ultimate carbon capture and storage machines. They absorb carbon and lock it up for centuries - and giant sequoias are our best chance to sequester as much of the stuff as possible.

“Climate change is upon us, we need to communicate the gravity to the world - and this is a scalable solution,” says Henry.

Watch me planting a sequoia with Henry in the video above.