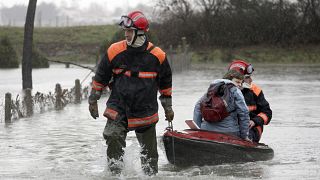 When you live by the sea, storms are a part of life.

On the night of 28 February, 2010, the forecast predicted strong winds and some rain for La Faute-sur-Mer, a French town that sticks out into the Atlantic Ocean like a tongue of sand.

Jean and Anne Birault took their usual precautions, removing anything from the garden that could fly away. Everything seemed quiet when they went to sleep.

The sound of leaking water woke them a few hours later. Anne got up to investigate. Looking out of the window, she saw a wall of water 1.5m high, pushing at their door and windows to get in. She immediately understood what was happening: "The sea was invading us.” She knew that she and her husband had just 15 minutes to get out.

Anne’s neighbour François Anil was one of the few residents of La Faute-sur-Mer who had researched what would happen in the event of a sea flood and what to do, and had warned Anne and Jean about the dangers.

On that night, 29 of their neighbours drowned in freezing water, in what came to be known as “la cuvette de la mort” – the basin of death. And Jean and Anne became climate migrants.

Xynthia was a perfect storm of hurricane-force winds, surging seas and driving rain that smashed into the western coasts of France and Spain overnight, wreaking havoc as far inland as Germany and leaving more than a million households without power. Fifty people were killed.

Neither the storm nor the flood were exceptional weather events. What made them so destructive was climate change.

If Xynthia had taken place a century ago its impact would have been far less severe, explains Freddy Vinet, a lecturer in Disaster and Natural Risk Management at the University of Montpellier.

In some oceans, the rise in sea levels has been as much as 20 centimetres since satellite records began in 1993, with the rate of increase more than doubling in the early years of the 21st century. The Intergovernmental Panel on Climate Change (IPCC) warns that sea levels could rise by a metre by 2100.

Firefighters arrived late at La Faute-sur-Mer, overwhelmed by calls from other towns. In the basin of death, phones – already underwater – were silent.

The night of the storm

The water surprised Elisabeth Tabary as she slept. She and her husband had decided to spend their retirement years in La Faute-sur-Mer. Her son, daughter-in-law and two-year-old grandson, Raphaël, had come to stay.

Elisabeth, who was sleeping downstairs with her husband and Raphaël, fled to the kitchen. Trying to stay above the water, she climbed up the door, with her feet on the handle and her grandson in her arms. Her husband drowned in front of her eyes. Hours later, her grandson died of hypothermia in her arms. "At that point, I wanted to drown myself," she says.

Elisabeth put the baby’s body behind the kitchen door, to protect him from being washed away by the water, dragged out by the low tide. Then she lost consciousness. Firefighters did not know Raphaël was behind the door and Elisabeth, who by the time they were searching was in a coma, could not tell them. They didn´t find him until 24 hours later.

Her son found Elisabeth at dawn, delirious. He and his wife had slept through it all on the second floor and he had no idea what was to greet him when he came downstairs. When Elisabeth awoke from her coma, she had a stroke. Today, she has problems remembering not just the night of the storm, but her life before it.

On the day of the funerals for her husband and grandson, she made the decision never to leave the town again, which she says would be like “abandoning the members of my family who died here”. Her son’s wife, Raphaël’s mother, has never set foot in the town again.

After Xynthia, more than 600 houses in the town had to be demolished and around 400 of the 1,000 residents who lost their homes decided to leave.

Leaving your life behind

Anne and Jean couldn’t live with the idea that something like this could happen to them again. Once the French state had bought their destroyed house from them, they relocated to Jard-sur-Mer, a town 30km away. For Anne, being a migrant is not a matter of distance, but of leaving behind the life they had built over decades, the home of their memories and where they raised their family.

In 2007, Ahmed Bounaceur, an intensive care doctor, bought a piece of land in the town. He was granted a building permit in less than two weeks. On the night of the flood, he lost his mother, wife and sons, Ismaël (5) and Camil (13). Only his daughter survived, and he left La Faute-sur-Mer for good, soon afterwards.

Then there's the story François Anil tells about his neighbour, a woman “with a German-Swiss accent who was living here in front of the sea. When the water arrived, her dog swam her to safety. Shocked, she left La Faute-sur-Mer for good and never came back”.

Hairdresser Adeline Baffart was six months’ pregnant when she and her husband had to climb on to the roof of their flooded house the night of the storm, where firefighters found them the following morning.

After Xynthia, she sold what was left of her house to the government and moved with her family to Triaize, 20km away, settling down in the apartment of her late grandmother. She gave birth to Julia, and a few years later, another daughter, Lilou, arrived.

Adeline, who doesn’t consider herself a climate migrant, still works in La Faute-Sur-Mer as all her clients are based there.

“Maybe one day we will go back to retire there when our daughters are grown up, but we will see,” she said.

France has the third-highest number of people displaced due to weather disasters in the EU, according to the Internal Displacement Monitoring Center (IDMC). More than 47,000 were uprooted between 2008 and 2019.

And 17 million people in the country currently live at risk of flooding, according to the European Centre for the Prevention of Flood Risks (CEPRI) – 20 per cent of French households.

Today, a golf club stands where Jean and Anne once lived, with cypress trees marking where people drowned.

The area was known to local authorities to be a flood risk when their house was built – but not to them. Maps from the time indicate where flooding was likely, but these were not taken into account when building permits were being issued and not shared when houses were being bought.

“If we had been informed, we would never have built a house where we built it,” says Anne.

After Xynthia, René Marratier, mayor of La Faute-sur-Mer from 1989 to 2014, was initially given a four-year jail term for manslaughter, reduced on appeal to a two-year suspended sentence.

During his trial, an expert witness stated that: “The freedom to build in the area at risk of flooding was absolute.”

Thierry Sauzeau, a specialist in maritime history at the University of Poitiers who had been studying the urbanisation of France’s west coast and, in parallel, marine submersions, added: “[There were] stacks of building permits to distribute, the procedure was being reduced to a mere formality.”

Corinne LePage, France's former environment minister and lawyer, who represented the victims, told Euronews: “La Faute-sur-Mer is a textbook case of climate change in the sense that there was well-made legislation against the risk of flooding that wasn’t applied.”

Marratier, who to this day proclaims his innocence but declined to comment for this article, was found to have knowingly refused to take any measures to protect his constituency, failed to implement a flood risk prevention plan (PPRI) and to have failed to provide information to residents.

After a decade away from public service, he is running again in the local elections in March 2020. He cannot stand for mayor but will try to get on to the town council.

The French state deemed it unsafe to rebuild homes in the areas flooded during Xynthia and risk prevention maps were updated in 2012 and 2017.

“This is a laboratory. It was the first time we had to tell people we need to demolish your house; that they would be reimbursed and that they did not have the right to build on their land anymore,” said deputy mayor Laurent Huger.

La Faute-sur-Mer now has evacuation plans that the mayor can make mandatory in the event of severe flooding, and the town hall has provided emergency training for all residents. Many have installed water detectors – similar to smoke alarms – on the ground floors of their houses.

“It is like a state of war. Now the majority of people at La Faute-Sur-Mer know what nature can do to their daily life,” said Huger.

Trying to move on

The tragedy of Xynthia prompted a national reflection on risk management linked to coastal erosion. There have also been calls to better protect those living by the sea.

LePage said this was necessary because it was difficult to prove a link between climate change and a catastrophic weather event.

“If you are exposed to a chemical product and you get cancer, you will have a hard time to say in court that the cancer is produced by the chemical agents,” she said.

“It’s similar for the climate. There is a strong presumption, but absolute proof that [these] things would not have happened [without climate change], it is just very difficult to have.”

Back in La Faute-sur-Mer, house prices are holding up. In France, living by the sea is not associated with risk, but rather with status.

In surveys carried out after Xynthia, the majority of people in the town said they were not afraid to remain living by the sea.

But for Anne, the memories are just too painful.

“The things that happened to us were too much,” she said. “When these things happen in other parts of the world, like the tsunami in Japan, I shake from the top of my head to my feet”.

Anne and Jean’s son stayed and opened a bar in the town centre. Now, a decade on, La Faute-sur-Mer is once again a golden retreat for pensioners and tourists.

“We had to reconstruct our image and soul,” said Huger. “It took us six to seven years, we raised the dykes and stopped the construction of new houses.”

But, despite the talk of the town’s resurrection, he sounded caution over forgetting a key lesson.

“We need to tell people that even if the state has told you the area is safe, and the town hall has built dykes, you need to know that, one day, the water could still come.”

This article was originally published in February 2020.

René Marratier was not elected by the people of__La Faute-sur-Mer__in the local elections the following month.

The Europe's Climate Migrants investigation was developed with the support of:

Reflecting Pool in US capital covered with ice