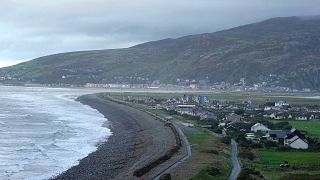 Like many who come to Fairbourne, Stuart Eves knew this coastal village in northern Wales was home for life when he moved here 26 years ago.

He soon fell in love with the slow pace of life in the 700-strong community, nestled between the rugged mountains of Snowdonia and the Irish Sea.

That changed suddenly in 2014, when authorities identified Fairbourne as the first coastal community in the United Kingdom to be at high risk of flooding due to climate change.

Anticipating both rising sea levels and extreme storms, the government said it could only afford to keep defending the village for another 40 years.

By 2054, officials say it will no longer be safe to live in Fairbourne at all.

Since the announcement, villagers have been encouraged to comply with a process of ‘managed realignment’ - a fancy term for abandoning the village to the encroaching sea.

Seven years on, most of their questions about the future remain unanswered.

"When they first told us that the village was going to flood, it was rather devastating news because it means that everything you worked for you're going to lose," says Stuart, who owns a caravan park in Fairbourne.

"Most people when they buy a property, they expect to see it mature and grow in money. For the people of the village of Fairbourne, everything they have bought they're going to watch demise and end up being worthless."

Why is the village so vulnerable to climate change?

The Welsh village is particularly susceptible to climate change because it faces multiple sources of flooding, according to Natural Resources Wales, the government-sponsored organisation responsible for sea defences in Fairbourne.

Built in the 1850s on low-lying saltmarsh, Fairbourne already lies beneath sea level at high spring tide. During storms, the tidal level can reach more than 1.5m above the village.

Scientists estimate that sea levels have risen by ten centimeters in the past century. As greenhouse gas emissions continue to rise, these levels could exceed one metre by the year 2100.

"With climate change happening and sea levels rising, it means that we would have to add an extra level of protection continuously in order to maintain the level of risk as it is at the moment,” says Sian Williams, head of operations for Natural Resources Wales's northwest division.

"As time goes forward that becomes much more expensive to do and there will be a point where the cost of maintaining [the village] becomes higher than the cost of what is protected by the defences there."

Despite these alarming figures, many villagers in the tight-knit community are refusing to budge.

“The fryers will be on and that will be it. Until water actually comes in here and we physically can't work, we'll carry on.”

Becky Offland recently took on the lease of the Glan Y Mor Hotel. Like many other residents, she remains hopeful that the authorities will continue to pay for flood defences beyond 2054.

"It'll bring a lot more financial support to our village and the businesses here, so there won't be any reason to close us down. We will stay, we will."

"If they want us out by 2054, then they've got to have the accommodation to put us in,” says the caravan park owner.

"What you have here is a human catastrophe albeit on a small scale. It's just emotional and people are going to lose what they've worked all their life for."