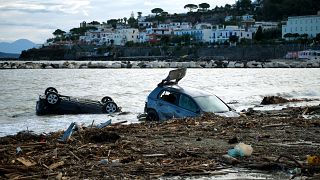 A landslide on the southern Italian island of Ischia that killed at least seven people was partly caused by climate change, an Italian environmental group has said.

The Italian Society of Environmental Medicine (SIMA) claims the heavy rains that triggered the mudslide on the island were an example of a climate-related extreme weather event.

The society reports that 130 exceptional weather phenomena have been registered in 2022 - the highest annual average in the last decade.

The storm that hit Ischia is an example of the disastrous effects of climate change, now "under everyone's eyes" the group added.

Did climate change cause the Ischia landslide?

Torrential rain early on Saturday morning caused a wave of mud and debris which devastated the small town of Casamicciola Terme in the north of Ischia.

Seven people have been confirmed dead while five are still missing.

Italian environmental society SIMA has warned that climate change is behind the landslide that swept houses and cars into the sea.

“The environmental crisis has the ability to influence the intensity and number of meteorological phenomena, thus making them more dangerous and destructive,” said SIMA president Alessandro Miani.

He said that heavy rains have had some of the most serious consequences for the country.

"The anomalous distribution of rainfall is increasingly taking the form of extremes concentrated in autumn and winter,” the president warned.

“Because of us, storms, floods, tornadoes and cyclones will be more numerous and destructive in the future."

Experts say decades of unauthorised construction aggravated the effects of the mudslide.

It is estimated that thousands of houses and other buildings were constructed under illegal permits on the island.

Large areas of trees - fundamental to securing soil and reducing landslide risk - were torn down to do this.

Experts add that a geological survey analysing mudslide risk was last carried out two decades ago.

How can Italy prevent devastation from climate change?

Both SIMA and the environmental association Legambiente have highlighted the need to prepare for future extreme weather events.

“The climate is changing, it is now a fact,” Legambiente said, “yet Italy continues to be unprepared and citizens are often left alone to deal with the impacts.”

Legambiente has appealed to the Italian government to establish a “national climate adaptation plan.”

The association has called for a law against building on areas of healthy soil and the creation of a national control room to monitor climate risks.

SIMA has also asked the government to launch a national reforestation programme.