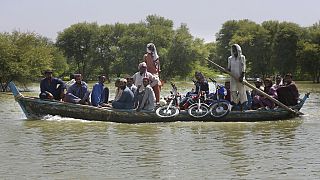 The UN announced plans for early warning systems against climate disasters for everyone on earth, potentially averting death and destruction in the developing world.

Early warning systems allow communities to prepare for hazardous climate-related events. They do so by communicating warnings and risks to people, generating observations and forecasts, and helping authorities plan and respond.

When effective, they can save lives, jobs, land and infrastructure

The cost of early warnings is 'dwarfed' by the benefits

The UN estimated its ‘Early Warnings for All’ plan will cost €3.1 billion – equivalent to 50 cents per person per year for the next five years.

This sum “would be dwarfed by the benefits” said the UN in a press release, citing huge potential financial and human benefits for vulnerable communities.

Countries with limited early warning coverage have disaster mortality eight times higher than those with high coverage. They also tend to be in the global south.

Spending just €800 million on such systems in developing countries would avoid losses of €3 -16 billion per year, according to the Global Commission on Adaptation.

“Just 24 hour’s notice of an impending hazardous event can cut damage by 30 per cent,” said Guterres in a statement.

“Yet, around the world, vulnerable communities have no way of knowing that hazardous weather is on its way. Nor do they have the means to act to save lives and protect livelihoods.”

How much of the world is already protected by early warning systems?

Around 50 per cent of the world’s population is not protected by multi-hazard early warning systems. Some have no climate resilience measures or local disaster preparedness plans at all.

Guterres pointed out that early warning systems were particularly needed in the developing world, where protections are low and populations bear the brunt of the climate emergency.

“Vulnerable communities in climate hotspots are being blindsided by cascading climate disasters without any means of prior alert,” he said.

“And the situation is getting worse. Those who have contributed least to the climate crisis are the most at risk and the least protected.”

People in Africa, South Asia, and South and Central America, alongside the inhabitants of small island states such as the Maldives, are 15 times more likely to die from climate disasters. Disasters of this kind displace three times more people than war.

The UN says it will work with governments and its partners, through policy, scientific, technical and financial action to achieve its goal within five years.

How will the plan for early warning systems be funded?

Questions hang over how the multi-billion euro initiative will be funded.

The UN has called for new targeted investments between 2023 and 2027 to finance the implementation of early warning systems. It announced the plans in front of government leaders, financing agencies, Big Tech companies and the private sector.

“These increasing calamities cost lives and hundreds of billions of dollars in loss and damage.”

Governments in 51 countries spent €697 billion on fossil fuel support, such as subsidies, in 2021, according to recent OECD and IEA

The number of environmental disasters has increased by a factor of five, driven in part by human-induced climate change and more extreme weather. And this trend is expected to continue.