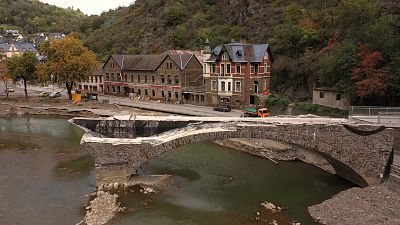 The floods in Germany and Belgium this year were seen by many as a wake-up call to the power of global warming to amplify extreme weather. In this episode of Climate Now we explore the role of climate change in that disaster.

Firstly, here is our unique monthly update on what's really happening to our planet with the latest data from the Copernicus Climate Change Service for September 2021.

September is the month when Arctic sea ice hits its lowest level after the summer. This year was a mixed picture. In the Greenland Sea there was a record minimum amount of ice last month, but then to the north of Alaska it actually hit a 15-year high. Overall the downward trend for the entire Arctic region continues, with eight percent less sea ice than average in September.

Taking a look at temperature anomalies for last month it was one of the four warmest Septembers on record globally, with temperatures 0.4 degrees Celsius above the 1991-2020 average. It was warmer than average across much of Canada, and the United States, and in Latin America, due to sustained drought. It was also warmer than average in western Africa, central Asia and parts of China.

The role of climate change in Europe's deadly floods

The deadly floods in Germany and Belgium in July claimed the lives of over 220 people. Global warming means such extreme rainfall events will become more intense and more frequent. In the German town of Altenahr, residents are facing up to this new reality.

The Ahr-region was devastated by the floods, and in Altenahr we witnessed broken bridges, wrecked businesses and destroyed homes. With the clean-up still on-going, the question of how to rebuild hangs in the air.

Euronews has the chance to meet Mayor Cornelia Weigand, who walks us through the river-side area that was once home to beer terraces, a car park, and even people's homes, and is now a sea of gravel and cracked concrete.

"There was a house next to that tree that completely collapsed in the floods and where unfortunately the people who were in the house also died. And here you can slowly start to understand what the flood actually did to us," says Altenahr's Mayor, Cornelia Weigand.

The heavy rain was indeed forecast and flood alerts were issued on the day of the disaster. However, the river Ahr rose far higher than anyone predicted, reaching up to ten metres in places.

Amateur footage from the 14th July shows how the waters rose rapidly in Altenahr, overwhelming the emergency services and leaving residents racing to avoid the flood. Many houses near the riverbank had experienced high waters in the past, with floods of 3 or even 5 metres in the history books. However, nothing had prepared the locals for what happed on that Wednesday.

In many cases, residents began by retreating to their upstairs bedrooms, but then as the water rose above the ground floor level they had to climb into their attics and onto their roofs to escape the water.

The dramatic scenes were amplified by the fact that the flood hit its highest level late in the evening, with residents of Altenahr having to fend for themselves until late morning or early afternoon on 15th July, when helicopters and rescue teams were able to reach them.

Experts say several factors led to the disaster, in particular the wet spring, which meant the rain just ran off the landscape, dragging debris and silt with it. Entire trees were uprooted by the water, cars and caravans were washed downstream, clogging the bridges and creating dangerous backlogs of water.

However, climate change played its part, too. A recent scientific study found that such intense rain events are now up to nine times more likely in western Europe as a result of global warming.

"The warmer it is, the more water the air can absorb. About one degree warmer air can hold about seven percent more water vapour, and what is in the atmosphere sooner or later comes down again as precipitation. And if we then have very slow-moving low-pressure areas, then flash floods like the one we experienced here in mid-July can build up within a short time," explains Tobias Fuchs, Director of Climate and Environment from Germany's Meteorological Service DWD.

How should the town rebuild?

Looking to the future and how the town should rebuild to prevent a repeat of the recent destruction, Mayor Weigand says she would like her town to become an example of flood resilience in a changing climate.

"It would make sense to see this as a model region. How can we achieve better flood protection for such valleys? How do we cope with the water volumes and how can we then build in such river valleys so that all the development becomes more resistant to such storm surges?"

Weigand told Euronews that she would love to see experts on water management from the Netherlands and Belgium plus pluvial flood experts from the Alps to come together to apply their expertise in the Ahr valley.

She also underlined the importance of establishing simple, efficient and robust flood evacuation plans for local residents who are keen to return to their homes. Although the centre of the town is now mostly empty save the workers brought in to clear the debris, the plan is indeed to make Altenahr a pretty tourist town once again, to rebuild where appropriate, and to be ready for the floods if and when they strike again.

German police carry out raids over negligence during deadly floods