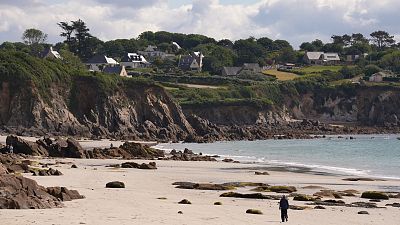 How should coastal communities adapt to the threat of erosion and sea-level rise?

In this report of Climate Now, Euronews reports from one of the Breton villages on a French government list of communities at risk from coastal erosion. The mayor shows us the problems he is facing on the ground and scientists offer their insight on how to adapt as sea levels rise by over 4 millimetres per year.

Before we head to Brittany, let's look at the latest data from the Copernicus Climate Change Service. Globally we've just experienced the fifth warmest May on record, with temperatures +0.3 degrees Celsius above the 1991-2020 average.

In Europe, it was an exceptional month across much of the continent. Many areas were warmer than average in May.

France had its warmest May on record, with average temperatures +3 degrees Celsius above normal. There were also heat waves across Spain and Portugal.

In far eastern Europe and western Asia, winds from the northwest kept temperatures well below average.

In regards to the global context for temperature anomalies last month, it was warmer than average in a huge band across central Asia and Siberia.

Then, we can see from the light blue over the eastern Pacific that the long-lived La Niña phenomenon continues. This mass of cooler water is connected to some recent extreme climate events like the heavy rain in Australia and the drought in the western United States.

Last month the French government published the map below of 126 seaside towns and villages which will have to update their urban planning laws because of coastal erosion.

It's a problem that's aggravated by accelerating sea-level rise as a result of climate change.

We travelled to one of the villages on the list, Plougonvelin, close to Brest, to see how they are facing up to this challenge. Mayor, Bertrand Audren, actually asked to be on the French government list to redraw his urban planning map.

He did so, he says, because he wants to "avoid people and property being hit by the erosion of the cliff face and big impacts to their homes 30 to 40 to 50 years down the line." His goal is to pre-empt these issues so that "people can prepare themselves."

In the next six months, experts will decide which zones of the village are at risk and the government will help finance adaptation measures. One of the mayor's goals will be to ensure that in future planning permits a budget provision is set aside to dismantle the property if it is sited in a future danger-zone.

As he waits for the government survey, he is already testing some small-scale natural defences.

This involved putting up barriers and picket fences with dune plants like marram grass to stop the sand from being lost. It's a deceptively simple approach that allows the sand to accumulate gradually and the plants to stabilise the rising dune.

The government move in France means communities can begin preparing for sea level rise. Average global sea level has already risen by nine centimetres since 1993, and it is now rising by over four millimetres per year.

There's an urgent need for action on two fronts, according to IPCC contributor Gonéri Le Cozannet, "The first is to limit global warming to stabilise sea level rise at about four millimetres per year."

"The second area for action is to adapt, either by protecting, relocating, or avoiding building in low-lying areas to actually limit the impacts of sea-level rise."

"This urgency is mainly motivated by the fact that adaptation takes a long time to set up and the governance of adaptation, i.e. mobilising all the actors, the mayors, the inhabitants, etc. also takes a long time, several decades in fact. So we have this double urgency which is both adaptation and mitigation of global warming," concludes Le Cozannet, who works for the French geological survey BRGM.

Gonéri's call to action is supported by the latest research from Alisée Chaigneau, a Phd student at Mercator Ocean, supported by Météo France and CNRS. She has been investigating the risk of extreme coastal flooding along the French coast in light of sea level rise.

She concludes that by the end of the century, every French coastal community should be prepared for damaging storm surges amplified by sea-level rise. "Rare events like coastal flooding that today might happen once every 100 years will, in the future, happen once every year."

"It's not necessarily going to be related to the fact that the storms are going to be more intense, but just that the sea level is going to be higher, due to the melting of the ice and the thermal expansion of the oceans," she explains.

In Plougonvelin, the cliff face is losing several centimetres per year. The cliff face is a sedimentary rock structure that's vulnerable to erosion, and the process is exacerbated by ever-higher waters.

Mayor Audren is aware that his urban planning map will need a thorough overhaul, but he tells Euronews that he is not too concerned.

"You shouldn't be worried. It's not in my nature to be worried. We have to be careful, of course, but it's not all doom and gloom," he says.