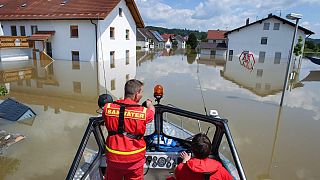 This is the only food Karl Bretzendorfer remembers taking up to the attic where he spent 13 days trapped with his wife Irina, as the waters rose around them in what Chancellor Angela Merkel called “the flood of the century” in Bavaria, south-east Germany.

Karl, 73, and his wife refused to be evacuated from their home because they were told they would not be able to take their four cats with them. They had lived through plenty of floods and thought this one would be no different. But when the water reached their knees, they panicked. This is when they fled to the attic.

“Luckily, we did have drinking water stored upstairs,” he adds. They also took sausages and bread, and toilet paper. They spent almost two weeks up there without power, playing cards and listening to the radio. Today, Karl laughs as he tells the story, but the couple’s house, in which they invested every cent they had, was left in ruins, the ground floor completely submerged.

They were only able to rebuild thanks to financial support from the regional government of Bavaria, Germany’s second-richest state by GDP. But those funds won’t be available if the river overflows again.

The flood of the century

In June 2013, after four days of heavy rainfall, the Elbe and the Danube overflowed. The previous month had been the second wettest May on record in Germany.

Half of Germany’s 16 states were badly hit – 21 people were killed and losses amounted to €11.6 billion. In Bavaria, the country’s largest state, flooding caused €1.3 billion of damage.

A history of flooding

“The region north of the Alps is highly susceptible to floods, because air masses get stuck there,” explains Günter Blöschl, professor of Hydrology and Water Resources at the Technical University in Vienna. Some cities in Bavaria are “historically built in a way that makes it very hard now to take precautions against floods,” he adds.

This is the case with Passau, proudly known as the city of the three rivers - the Danube, the Inn and the Ilz converge on its territory - but less honoured to be a drainage destination for most of southern Germany.

“It was clear from the beginning, not all parts of town can be protected from flooding,” said Jürgen Dupper, the city’s mayor.

Karl lived through his first flood as a child in 1954. Over the years, the waters rose again and again. His village, Fischerdorf, is a district of Deggendorf, built on a plain where the Danube and Isaar rivers meet.

“The name Fischerdorf literally means ‘village of the fishermen’,” says Georg Kestel, head of the environmental NGO BUND Naturschutz. “People from here used to know where to build, and if they built in a wet area it took them one flood to learn and rebuild somewhere else.”

So Karl wasn’t worried when, in 2013, he heard the Isaar was flooding again. The water had never before risen above knee-level and the damage had always been limited. But this time, water started to flood from the street gullies.

Fischerdorf’s dam burst and the water level eventually rose to eight metres, submerging the entire village. From the window of their attic, Karl and his wife watched the waters rise around their home.

“The effects of the flood in 2013 were dramatic,” says Mayor Dupper. “We had a power outage and a shortage of potable water, which brought catastrophe management to its limits.” He estimates the damage done amounted to €250 million in Passau alone.

In Fischerdorf, some 600 houses had to be rebuilt and more than 200 were demolished. The damage was not caused by water alone - the flood water became contaminated by heating oil leaking from damaged tanks.

Iris Hirshauer recalls: “We would wake up in the night asking ourselves, where will we go if there’s oil in the house?”

When the floods came in 2013, she was living with her family in Niederalteich, a village on the Danube 11 kilometres south of Fischerdorf. They thought they would be displaced for one night and it ended up being two months, during which the question of whether they would survive the flood financially kept them awake, night after night. The family did not have home insurance.

They were not alone – in Bavaria, just 21 per cent of people had their houses insured in 2013. Home insurance is not compulsory when buying or renting a house in Germany. Iris says insurance fees were simply unaffordable in her area, as flooding was too frequent there.

However the Bavarian government came to their aid, funding 80 per cent of rebuilding for uninsured homeowners. Ironically, for those with insurance, the wait was longer and hampered by bureaucracy.

Ewald Bayer, who travelled to Fischerdorf to volunteer after the flood helping affected homeowners clean up and then rebuild, got to know the community well.

“The people who renovated their old houses instead really only received money for the renovation. There were actual fights in Fischerdorf over the money situation. There is no community left here, only jealousy.”

In March 2017 the Council of Ministers - comprised of the heads of government of each German state - voted to issue a recommendation to end financial support for victims of natural disasters who had not previously taken out home insurance, where it was possible to do so. Bavaria chose to adopt this as policy, which came into effect on 1 July, 2019.

The Bavarian ministry of finance told Euronews that despite these guidelines being adopted, they would be applied according to individual economic circumstances and exceptions could still be made. Karl hopes that if a flood hits again in the future, he will be one of them. The thought of the bureaucracy involved in proving that he was unable to afford insurance, and the fact that there could be nothing at the end of it, is daunting.

He says that, in his case, he would have to pay €1,000 for insurance per year – a figure 10 times higher than the average price of household insurance in Germany, according to the General Association of the German Insurance Industry (GDV).

Karl’s lives off his pension alone, a monthly income of just €850. "I have other expenses," he says. “I’m a poor pensioner.”

Christian Weishuber of Allianz, the world's largest insurance company, said the figure Karl was quoted was "very expensive" but, in terms of the insurance market, was not surprising, given that he lives in a high-risk area.

Brother Vinzenz Proß is the treasurer of a monastery in Niederalteich. After the flooding of 2013, he called an insurance agent to get a quote.

“He spent a day here, evaluating and assessing,” Brother Vinzenz says. “After a month his proposal finally arrived and I thought, OK, that’s not affordable for us right now.” The monastery, which is also a school, is still rebuilding after the damage from the 2013 flood.

Dupper said he asked insurance companies what the yearly rate for a house in the old town of Passau would be. “They said €30,000. That sum makes you realise it’s easier to just save some money yourself for the eventual flood damage.”

He believes the structure of Passau’s old town and inner city would be completely destroyed if there was to be a new flood, and this time no state aid to fall back on.

“As a result of climate change, we must prepare for an increase in extreme weather and natural disasters.” These are the words of a government campaign to encourage Bavarians to take out private home insurance.

But when it comes to those who can’t afford to do so, or have tried and failed due to living in a high-risk zone, Bavarian Green MP Jürgen Mistol says he doesn’t know of any state-funded aid programmes available. "I believe it is necessary to support those who have tried unsuccessfully to obtain insurance cover for extreme storm damage,” he says.

According to data from Allianz, the number of insured households in Bavaria has increased to 41 per cent since the floods of 2013, but that still leaves more than half of residents facing a future in which the only certainty is more flooding.

A 2019 study led by professor Günter Blöschl found that increasing autumn and winter rainfall has resulted in a rise of about 11 per cent per decade of flooding in northwestern Europe. A warmer atmosphere, caused by climate change, contains more humidity which leads to increased rainfall.

Ironically, climate change is also causing a reduction in floods in other parts of Europe - a decline of 23 per cent per decade in southern Europe, the study says. “This is connected to cyclones moving over the Atlantic from North America to Europe and arriving in the northern part now,” explains Blöschl.

Climate migrants in the heart of Europe

“We believe that nature will take what it wants. Maybe it won’t happen the exact same way in Niederalteich next time, but it will happen again,” says Iris.

She recalls the flood as a highly traumatic experience, from the evacuation to the long wait to come back home.

While we were evacuated in 2013, I kept thinking, Oh God, my husband is working on the dam, my son is sleeping next to me, and the house is gone. We won’t have anything left. How will we go on?

Today the family lives in Hengersberg, a village just 4km from their old home, yet out of the high-risk flood area. Insurance is much cheaper there, Iris says. “We want to pass something on to our son, and this house is insured,” she adds.

Ewald Bayer, who volunteered after the 2013 floods, thinks the vast majority of the inhabitants stayed because they were “well taken care of” - meaning, by the state. “I believe that if people hadn’t received those 80 per cent state funds, they would have all left Fischerdorf,” he adds.

Climate migrants in the heart of Europe, in one of the richest areas of Germany. Who would have thought?

Brother Vincenz has asked himself many times what he would do in another flood. After the last one, he was unable to eat for months and had recurring nightmares. “Would I stay or would I panic and just leave? I don’t know the answer,” he says.

For Karl, there is no question. He is never going to leave his village, that's clear to him. He says next time there is a flood he and his wife will take their cats and leave the house - but only until the waters recede. But he says he doesn’t have the strength to rebuild his house again if it is damaged the way it was in 2013. So he prefers just not to think about it.

This article was part of a series originally published in March 2020.

COVID-19 creates opportunity to 'reshape the future of energy': IEA

Without continued aid, the next migrant crisis will be people fleeing coronavirus not war ǀ View