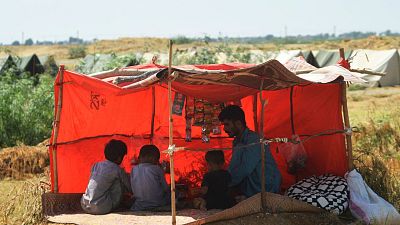 Mass migration towards the Earth’s poles will help humanity survive the climate crisis, according to a new book.

The planet could warm by more than four degrees Celsius by the end of the 21st century.

In her new book Nomad Century: How Climate Migration Will Reshape Our World, she argues that we should ditch outdated border controls and embrace mass migration.

“People will have to move (from) unliveable places,” she said at a Royal Society of Arts talk on Thursday.

“We need to manage migration so that it is not a catastrophe… but a safe, productive transition into a sustainable future.”

How many people will have to migrate because of the climate crisis?

The changing climate is already forcing people to abandon their homes.

According to the United Nations High Commissioner for Refugees (UNHCR), around 21.5 million people have been forcibly displaced by weather-related events since 2008.

The Institute for Economics and Peace - a London based think tank - estimates that around 1.2 billion people could be displaced by climate change over the next 30 years.

As floods, fires, and heatwaves become more common, some regions of the planet will become borderline uninhabitable.

Vince cites Mumbai - where 9 million people live in slum housing - as an example.

“There is no way that these 9 million people can have air conditioning in their slums,” she says, adding that they regularly face power outages during heatwaves.

“This is also the case large parts of Bangladesh, also the case for places across Africa, across the Americas, there are places that will not be able to adapt to these extreme temperatures.”

How should we deal with climate migration?

Migration to northern latitudes is inevitable, Vince says - and it shouldn’t be seen as a bad thing.

“Populist governments… basically use migrants as a scapegoat for everything, for job problems, for failing social security and welfare systems,” she says.

“But so many studies show that migrants increase the wealth, increase the productivity of cities where they integrate well.”

This influx of people will enrich cities in the global north, the author argues. For example, it could help fix demographic problems in places like Europe where the population is gradually ageing.

The climate journalist poses a number of different solutions. One option is for the United Nations to offer ‘global citizenship’ to people, a category that would operate alongside existing national citizenships.

On a national level, governments should allow new arrivals to work, legally pay taxes, and participate in society.

Will the earth warm by four degrees?

In the 2015 Paris agreement, the international community agreed to try and limit warming to 1.5 degrees Celsius above pre-industrial levels.

But according to the Climate Action Tracker, we are on track for 2.7 degrees of warming by 2030.

The earth could plausibly warm by 4 degrees, Vince says, as we pass ‘trigger points’ sparking vicious cycles of irreversible change.

If permafrost - which covers a quarter of the landmass in the Northern hemisphere - thaws, it will release huge amounts of CO2 and methane into the atmosphere.

“There is actually quite a serious risk that we do hit these catastrophic temperatures,” Vince warns.

“We need to be honest with people about exactly what we’re facing.”

These risks make it all the more urgent to overhaul our migration systems.

“The future is very much unwritten… we have many possibilities,” she says.