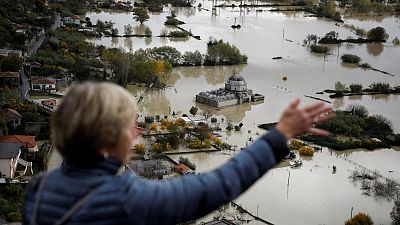 2022 has brought the climate crisis home for Europeans like no other year.

It may be a ‘spyglass’ into the new normal, say researchers behind a new study showing the fire season reached record ‘burned area’ in some regions of south west Europe.

The continent also likely suffered the worst drought in 500 years this summer, followed by dangerous flash flooding in places.

And more data is pouring in on the deadly toll of this extreme weather. French authorities, for example, have just estimated that the year’s heatwaves caused an excess 2,816 deaths.

As well as the danger to life, people are increasingly concerned for their homes.

Given the potential impact on the insurance industry, UK comparison site ComparetheMarket has drawn up a list of the 10 European countries where houses are most vulnerable.

Which European countries are most at risk of climate-related home damage?

Spain tops the list of most climate vulnerable countries, losing a vast 4,185 acres (1,694 hectares) of land to wildfires per year, according to the analysts’ calculations.

They looked at a number of factors to give each country an overall climate score, and Spain was also pushed to the top of the list by its air pollution levels.

But it is Portugal which suffers the most from wildfires, with an average 6,039 acres (2,444 hectares) of land burned per year. Inevitably, some homes are in areas of high risk.

Serbia is the European country most at risk of flooding caused by heavy rain with an average of 1.4 floods caused by downpours per year. This makes it the number one country for flood-related home damage.

Overall, Bosnia and Herzegovina ranked second on ComparetheMarket’s list, due to both a high number of fires and floods.

And the UK came in third, bumped up by its poor air quality and high pollution level.

The most vulnerable English cities

The UK price comparison website also took a closer look at English cities, to see where people are most in need of insuring their buildings and contents.

It found Kingston-upon-Hull to be in the most precarious position, with 90 per cent of residents threatened by flooding from the River Hull or Humber estuary.

Leeds came second, with the highest average rainfall levels per year at 88mm, followed by Plymouth, Manchester and Preston.

London, Nottingham and Derby are most at risk of flooding from rivers, while Southend-on-Sea has the most to fear from surface water flooding.

How can you protect your home from floods?

ComparetheMarket advises homeowners in flood prone areas to replace wooden floors with more resistant alternatives like ceramic tiles. Repositioning electrical sockets and appliances away from the ground is also wise.

The price comparison website says that shutters or reflective blinds are a good way to combat the sun’s heat in high temperatures, reducing the risk of sun damage and fires.

Securing fences, doors and posts is important in the event of strong winds.

Naturally, the company has some words of warning when it comes to insurance providers too.

It advises people in high risk areas to “make sure your home insurance covers flood damage to both the building and its contents, as this level of cover varies between providers.”

The home insurance team at Comparethemarket says: “There’s still a common misconception that insurance providers include an Act of God clause in their policies to avoid paying claims.”

While this was once common practice, times have changed and providers tend to be a lot clearer about what is and isn’t included in your policy, it says.

“If a natural disaster, like a fire, flood or storm damages your home, you may find that your home insurance covers you. That said, your policy is likely to have exclusions and isn’t going to cover you for all unforeseen circumstances.”

But, as always, make sure you read the fine print and check sections relating to natural disasters carefully.