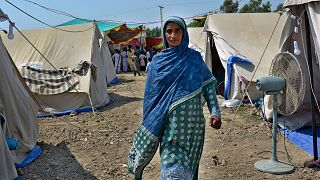 Pregnant women are struggling to get care after Pakistan’s unprecedented flooding, which inundated a third of the country at its height and drove millions from their homes.   -  Copyright  AP Photo/Shazia Bhatti
By Euronews Green  with AP  •  Updated: 19/10/2022

Pakistan’s record-breaking floods this summer have caused more than €40 billion in damages, according to a World Bank estimate relayed by the country today.

That’s $10 billion (€10bn) more than an earlier estimate by the Pakistani government.

The cash-strapped South Asian nation was already facing a serious financial crisis before the heavy monsoon rains hit in mid-June.

The rains triggered unprecedented floods that at one point left a third of the country's territory submerged, forcing hundreds of thousands of people to move to safer places.

The new assessment came during a meeting in the capital, Islamabad, between Prime Minister Shahbaz Sharif and experts on climate change. There was no immediate word from the World Bank on the new figure.

How deadly and damaging were the Pakistan floods?

The flooding, which experts say is made worse by climate change, has killed 1,719 people and affected 33 million since mid-June. The waters have damaged or washed away 2 million homes.

Sharif's government last month offered an estimate of $30 billion (€30.6 bn) from the floods but cautioned that the real figure may be far higher. A final report on the damages is yet to be finalised with the help of international aid agencies and lending institutions, including the World Bank.

The United Nations has revised its appeal for aid for Pakistan five-fold, to $816 million (€831.6 mn), from the initial $160 million (€163 mn), saying recent assessments about the damages caused by floods pointed to the urgent need for long-term help, lasting into next year.

Despite having less than 1 per cent share in global carbon emissions, Pakistan is among 10 countries most affected by climate change.

A government statement following Wednesday's meeting between the premier and the newly formed Pakistan Climate Change Council quoted an often-repeated statement by Sharif that despite having less than one per cent share in global carbon emissions, Pakistan is among 10 countries most affected by climate change.

Sharif also said that he hopes that COP27 in Egypt next month - for which the Pakistani prime minister was recently nominated as vice-chairman - will offer Pakistan “an opportunity to present its stance on the vulnerability of the developing world with regard to the effects of climate change."

According to government officials, more than half of the flood victims in Pakistan’s worst-hit Sindh province have returned to their homes over the past three weeks after floodwaters receded there and elsewhere in the country, including Baluchistan, where the UN estimates that floods damaged 43 per cent of crops.

Pakistan wants the world community to scale up aid for flood survivors, now also threatened by waterborne diseases, malaria and dengue fever. Experts say people in flood-hit areas will face a harsh winter this year and that aid is urgently needed.