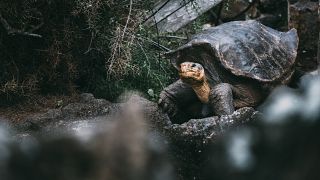 The World Wildlife Fund estimates that global wildlife populations have decreased by almost 70 per cent in just 50 years.

Deforestation, human exploitation, pollutionand climate change were the biggest drivers of the loss.

Yet hope is not lost. At the COP15 biodiversity summit, which kicked off this week, countries are coming together to combat threats like these.

To prove the amazing resilience of our planet's underdogs, and highlight the success of ongoingconservation projects, here are the resurrection stories of some remarkable species people once thought were extinct.

Neither elephant nor shrew, these compact anteater-like creatures were believed to have become extinct back in the 1960s due to data deficiency. Global Wildlife Conservation (GWC) had even listed it as 25 of their 'most wanted' species after such an absence of sightings.

Researchers decided to investigate further nearly 50 years on after a reported sighting in Djibouti, a country within the Horn of Africa. They were puzzled by this revelation due to their namesake being the only country they were believed to have inhabited pre-extinction.

Using a delicious offering of peanut butter treats they were able to spot 12 of them living happily without any immediate threats to their wellbeing and hope to sustain this existence.

It has since thankfully been removed off the list and might have even taken its tiny legs across the Horn to Ethiopia.

The black-naped pheasant pigeon was last documented by scientists in 1882 - that was until 2022 footage captured the rare bird in Papua New Guinea.

The new discovery was like ‘‘finding a unicorn,’ expedition co-leader John Mittermeier said.

The pigeon only lives on the rugged Fergusson Island off eastern Papua New Guinea, where mountainous terrain and thick forest made the search for the bird extremely difficult.

After a local hunter heard the pigeon's distinctive call, researchers supported by American Bird Conservancy set up camera traps and were "stunned" to capture the bird on film.

This one took over a century, but was certainly worth the wait. In 2019, tortoise conservationists were elated to find the feces of this reptile in the Galápagos National Park after zero signs of life since 1906.

The tortoise responsible was a female understood to have been roaming the island the entire time. It’s a wonder how this was possible given the Galápagos island's huge lava flows.

Her age bears no meaning on mating prospects, as tortoises are able to live until they are 200 years old.

The director of the Galápagos Conservancy's Giant Tortoise Restoration Initiative (GTRI) called it the “most important achievement” of his life.

In 2022, scientists finally proved that she is indeed a member of the chelonoidis phantasticus species - better known as the ‘fantastic giant tortoise’ - believed to have died out more than a century ago.

These huge 'tree lobsters' were thought to have been significantly impacted by a shipwreck on Lord Howe Island in Australia over 100 years ago. Swathes of rats were released onto the island with no controls to stop them, near eradicating the population of these insects.

In an unexpected plot twist, the number of rats on the island soared sky high with no larger mammals around to regulate them.

Numbers of Lord Howe stick insects teetered downwards until they were finally classified as extinct in the 1980s. They were found to be thriving atop of the trees surrounding Balls Pyramid, an island formed of volcanic remains, several decades later.

Actually re-classifying this particular species wasn’t without its challenges - scientists argued the differences between these stick-like creatures were too hard to distinguish from similar species.

This story has a happy ending thanks to Melbourne Zoo’s captive breeding programme and genome sequencing from old museum remains. The Australian government now plans to reintroduce them back on the island.

The rediscovery of the coelacanth holds up as one of the most important animal rediscoveries of the 20th century. Why? Because they predated dinosaurs, that’s why.

Prior to its rediscovery the coelacanth’s only known existence was through fossil records over 65 million years old, when it is thought to have died out.

None of this would have been possible without the insight of self-taught zoological expert Marjorie Courtenay-Latimer. The South African museum worker was often brought in to identify the strange discoveries of fishermen and sought the help of Professor James Leonard Brierley Smith to do so. They broke the news of its existence via telegram.

Much of its behaviours are still a mystery to conservationists, but we do know that they live a calm existence on the ocean floor and that the last survey estimated the population at 230-650 fish.

We now know that they commonly inhabit the waters of Indonesia too.

There was a point in time where Americans thought the Caspian Horse, a beloved starter breed for budding equestrians, was a historical footnote. They were rediscovered in the mountains of Iran by researcher Louise Firouz during her search for horses to accompany her new equestrian centre for children.

She realised they’d used the land for refuge away from carrying the chariots of wealthy Persians and Egyptians and made it her mission to create a breeding herd where they could thrive. They were even able to live through her brief imprisonment during the Iranian revolution.

Fortunately it worked, and there are now over one thousand worldwide.

Back in the 15th century it was said that over a million Bermudan Petrel called the island their home. Given that the island’s human population currently stands at 60,000 or so, they would have had quite the presence.

After a lengthy period of decimation from land mammals, their extinction seemed certain to the point they were titled a 'lazarus species' - a type of bird so disparate any population increase would seem like a return from the dead.

This return became a reality in the 1950s by sheer accident and has since been facilitated by the fact these birds (adorably) mate for life.

A settlement project is ongoing at Nonsuch Island after the first set of birds imprinted successfully. Tourists can experience them in all their glory on boating tours and an incredible live camera of their burrows can be streamed online.

Two bird watchers roaming the rainforests of Borneo, Indonesia, couldn’t believe their eyes when they came across this long-extinct bird.

After some speculation in the global ornithology community they were able to uncover what a sublime discovery it was last October. It's time away from public life is the longest 'missing period' of any Asian animal and people have no clue what it has been up to for 170 years. Researchers now think they may have been hiding in plain sight from people that simply didn’t know how to spot them.

It has created an invaluable framework to get their jungle populations growing.