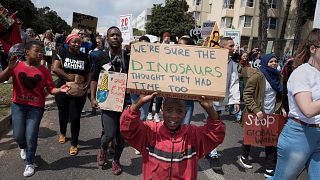 Nearly three-quarters of young people in Africa say that climate change is a big concern for their future - but only 46 per cent believe their governments are doing enough to combat the crisis.

The African continent has the world’s youngest population, with around 60 per cent of its 1.25 billion people under the age of 25.

The African continent has the world’s youngest population, with around 60 per cent of its 1.25 billion people under the age of 25.

New research from interviews with 4,500 18 to 24-year-olds across 15 different African countries reveals deep concern about the climate crisis and what it could mean for their future.

Conducted by the Ichikowitz Family Foundation, this data investigates the views, hopes and aspirations of young people across the continent, revealing the most pressing issues they are facing.

Africa’s youth are at the forefront of the climate crisis

More than 70 per cent of respondents were worried about increasing levels of pollution, extreme weather and the destruction of natural habitats, the African Youth Survey found.

In some countries such as Ethiopia and Malawi, levels of concern were even higher, with around 90 per cent of young people expressing serious worries for the future. For these young people, there is a strong feeling that climate change will affect them personally.

“Over a quarter-century after COP was established, Africa tragically remains the most vulnerable continent to climate change, while contributing the least emissions,” says Ivor Ichikowitz, Chairman of the Ichikowitz Foundation and sponsor of the African Youth Survey.

Despite seeing devastating impacts including locust infestations, drought and climate famine, the continent is responsible for just 3 per cent of global emissions.

Despite seeing devastating impacts including locust infestations, drought and climate famine, the continent is responsible for just 3 per cent of global emissions. A study commissioned by the United Nations Environment Programme (UNEP) shows that the cost of adapting to climate change across Africa could be as high as $50 billion (€44.2 billion) by 2050.

“Our research shows that Africa’s youth are at the forefront of experiencing the consequences of climate change in their daily lives. Droughts, flooding, extreme temperatures, and destruction of natural habitats – climate change is already a devastating force affecting communities across Africa,” Ichikowitz adds.

Off the back of these concerns, the young people who responded to the survey want to see those in charge do more to tackle the problem. 85 per cent believe that their governments need to be more proactive in addressing climate change.

“Our youth are suggesting that their governments should do more to address climate change, adopting green energy solutions to reduce carbon emissions, for example; they are dissatisfied with efforts of leadership to-date,” says the Rwanda-born founder of youth environment NGO, Green Fighter.

She adds that the results of the survey show the willingness of the continent’s young people to be global leaders in environmental action. A willingness that is essential for measurable impacts across African communities and beyond.

What are young people in Africa doing?

Young people in Africa aren’t sitting idly by waiting for governments to act either, with 67 per cent actively supporting, participating in and donating to environmental causes.

“It is not just a matter of calling for action from the government, but also a matter of introspection,” says Dr Richard Munang, Africa Regional Climate Change Coordinator at the UNEP.

“Young people, for example, as the biggest non-state actor constituency in Africa and individual citizens, need to ask themselves what they can do, using what is accessible to them, beyond the traditional calls to government.”

What the data from these interviews provides is a measurable way for those in charge to see what the most important issues are for one of the largest demographics across Africa. It shows that young people want and need concrete action on climate change.

“The road to a sustainable green industrial revolution in the 21st century will not be an easy endeavour,” Ichikowitz says.

“Our Survey proves that Africa will have the right captains at the helm to navigate it. It’s our job today to empower and embolden them to do so.”

Environmental journalists on what was missing from their schooling