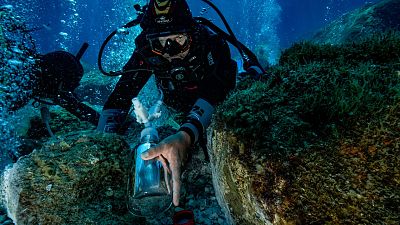 Underwater volcanoes are the source of 80% of volcanic activity around the world.   -   Copyright  © Alexis ROSENFELD - UNESCO - @1ocean_exploration
By Doloresz Katanich  •  Updated: 27/06/2022

Tsunamis are mercifully rare in Europe, so preparing for them isn’t top of the science agenda. But underwater volcanoes could be a bigger threat than previously thought.

A recent expedition to the Aeolian Islands, off the coast of Sicily, took a closer look at the rarely-witnessed underwater world of submarine volcanoes. Alexis Rosenfeld, an underwater documentary filmmaker, captured images of the Panarea underwater crater.

Though beautiful, these volcanoes are potentially dangerous. In the event of a volcanic explosion, "one of the risks is the formation of a tsunami," says volcanologist Francesco Italiano of the Italian Istituto Nazionale di Geofisica e Vulcanologia (INGV).

Life on the Earth started from this kind of place.

"This is a phenomenon that moves at a very high speed, at least 300 km/h. It could therefore hit the islands in a few minutes, which means that we have to react very quickly," he explains.

The expedition was organised by the UNESCO-1 Ocean team. It revealed many of the hidden wonders of the underwater volcanoes - and some of the dangers they may mean to coastal communities.

What are underwater volcanoes?

Though frequent eruptions often go unnoticed, the undersea volcanic activity is a constant process that shapes the features of the ocean.

“From the surface, you wouldn't suspect anything. Yet the underwater volcanoes of Panarea are one of the most striking landscapes I have ever seen,” says Italiano.

The Aeolian Islands is particularly known for its intense geothermal activity. Among others, Europe’s largest volcano called the Marsili is also hidden under the water on the coast of Naples. “If it erupts and collapses there, it can create a tidal wave,” says mission leader Alexis Rosenfeld.

Is Europe at risk of tsunamis?

The underwater volcanoes of the Aeolian Islands are a constant threat to coastal populations. In recent years, experts have observed worrying changes in the behaviour of the region's volcanoes.

They believe that a “major event” is possible. Their estimation shows that, according to a natural cycle, there is a major explosion in this area every 70 years. The last one took place at the end of the 1930s.

UNESCO is no stranger to protecting coastal communities from tsunamis. It coordinates the Pacific Tsunami Warning Centre and has set up similar programmes for the Caribbean, the Indian Ocean, the Northeast Atlantic and the Mediterranean.

However, tsunamis generated by underwater volcanoes or landslides may pose a different threat than those that are caused by earthquakes.

“For non seismic-generated tsunamis, so those that are not generated by earthquakes, we have little or no warning system in place, “ says UNESCO tsunami specialist Bernardo Aliaga.

“That’s one area that needs to be improved. And then we do need to also work in the communities to generate a mechanism to respond to these kinds of events,” he adds.

To become ‘tsunami ready’, a community must have a risk reduction plan and map out tsunami hazard zones. UNESCO also recommends educating local people on what to do in the event of a tsunami, such as escape routes.

The organisation has recently announced its plan to train 100 per cent of at-risk coastal communities by 2030.

Watch the video above to see the exceptional images of the mission.