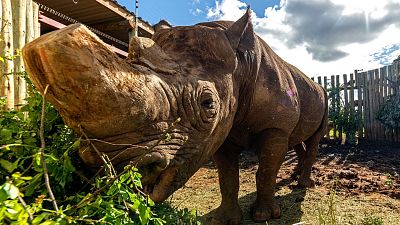 The animal quickly became known as Munu, a member of the rare bicornis bicornis subspecies who had lost the retinas in both of his eyes.

After being tranquilised by the park’s veterinarian team, he was safely relocated to a specialised facility at the Mantis Founder’s Lodge, South Africa.

“Every rhino matters,” says Paul Gardiner, CEO of the Mantis Foundation, “so we’re giving him a second chance.”

Since settling into his new surroundings, Munu has been able to leave his pen and roam across five hectares of surrounding wilderness.

He benefits from 24-hour surveillance, advanced anti-poaching protection - and even a built-in music system.

“If you stand in his enclosure, there’s a permanent streaming of a radio station that he loves,” Gardiner explains.

And when pressed on Munu’s preferred musical genre, the Mantis CEO can’t help but laugh.

What are the dangers facing rhinos in Africa?

During the 20th century, Africa’s black rhino population was ravaged by European hunters.

Much like white rhinos, black rhinos are killed for their horns, which attract high prices for their use in ornaments and traditional Chinese medicines.

In South Africa alone, 594 rhinos were killed for their horns in 2019 - a vast improvement from the 1215 individuals that were killed in 2014 when the problem was at its peak.

This decline has much to do with South Africa’s successful monitoring and conservation schemes, as well as the coronavirus pandemic.

In 2020, the country’s poaching figures decreased for the sixth year in a row, with just 394 rhinos killed for their horns.

The environment ministry put this down to the country’s harsh lockdown restrictions, which prevented the movement of would-be rhino horn smugglers.

A symbol of hope

While poaching figures continue to decrease, protected rhinos like Munu reflect a growing interest in wildlife conservation across South Africa.

Guests at the Mantis Founder’s Lodge flock to visit the blind animal, who has quickly become an ambassador for his species.

“When Munu became acclimatised here, we recognised that people could get as near as a metre away from him,” says Brett Barlow, Munu’s principal carer at the facility.

“This is a rare opportunity for ambassadorship and education.”

As well as welcoming guests through their Rhino Impact Experience, Mantis has launched a community outreach project. This allows local school children to visit Munu and develop an early interest in the natural world.

“Building this stewardship in local children is critical to saving the species,” adds Barlow.

“Through education, the next generation can be deterred from poaching and become guardians of the nature that they neighbour.”

Now conservationists are hoping to find a mate for Munu so they can create a breeding programme which could bolster the population of the bicornis bicornis subspecies.

“If Munu hadn’t had become blind, he would have continued to be a prime breeder for the next 10-12 years,” continues Barlow.

“We hope that successful breeding between Munu and a female will lead to offspring that could then be donated to South Africa’s national parks - introducing a valuable new bloodline.”

Watch the video above to find out more about Munu the Blind Rhino.