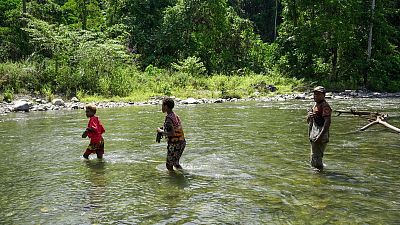 Palm oil companies selling to European brands boasted about the use of child labour and beatings of local people.

The South Pacific nation is home to the world’s third-largest remaining rainforest: a critical carbon sink helping to mitigate the climate crisis.

But under firms supplying household names like Nestlé, Kellogg’s and Colgate, tens of thousands of hectares of tropical forest are being destroyed.

“This investigation shows they are being sold out by their own government and global financial institutions in favour of a small number of highly destructive companies, with devastating human rights and environmental consequences.”

As this tainted palm oil continues to circulate in European supply chains, the NGO is calling for strong EU action to end complicity and demand change in the industry.

What did Global Witness uncover?

On tape, top ENB executives were recorded bragging to undercover investigators that they had bribed a Papua New Guinean minister; paid police to brutalise villagers; used child labour; and participated in an apparent tax evasion scheme.

In the village of Watwat, men and boys as young as 16 were dragged from their beds one night in July 2019. “When the boys woke up, they were at gunpoint. They tied their hands at the back and blindfolded their faces so they could not see,” a resident said.

“When the boys woke up, they were at gunpoint. They tied their hands at the back and blindfolded their faces so they could not see”

Five youths were beaten and held for weeks, part of a sustained pattern of abuse directed at communities suspected of opposing the companies’ ravaging activities.

Asked by Global Witness whether anything good had come from palm oil development, another villager said “only destruction.”

A second palm oil firm, Rimbunan Hijau, ignored repeated and avoidable worker deaths and injuries on its plantations, with at least 11 workers and the child of a worker losing their lives over an eight-year period.

The NGO’s investigation also raises serious concerns that plantations such as these were operating on grabbed land - in violation of land laws in Papua New Guinea.

Why is the Papua New Guinean rainforest so important?

Covering half of the massive island of New Guinea, Papua New Guinea (PNG) is one of the most biodiverse places in the world.

It sustains at least five per cent of all species on Earth, many found nowhere else: forest dragons, tree kangaroos, resplendent birds of paradise, and the only known night-blooming orchid.

Billions of metric tonnes of carbon are stored in its towering trees, making them a vital carbon sink and a key resource in the fight against climate change.

All of this is imperilled by the palm oil industry, Global Witness has discovered, through using satellite imagery, analysing company records and interviewing local people.

Who is handling the tainted palm oil?

For the first time, the extensive investigation has revealed that dirty palm oil and its byproducts are being sold to household brands including Kellogg’s, Nestlé, Colgate, Danone, Hershey, and the parent companies of Imperial Leather and Strepsils.

It’s not just the names on our supermarket shelves that are complicit.

Two of the palm oil suppliers received direct and indirect backing from global financiers such as Robeco and BlackRock.

"This investigation is yet further confirmation that the global financial system is broken – the business-as-usual, voluntary approach of past years has led us into climate crisis,” says senior investigator Ms Stanley.

"Firms like BlackRock talk a big game on their commitment tackling climate change and protecting human rights, yet our revelations show its money is ultimately financing the destruction of climate-critical forests, the use of child labour, and other human rights abuses.

"It is increasingly urgent that governments legislate to prevent supply chains and global financiers bankrolling deforestation and human rights abuses."

What can European companies and citizens do?

The presence of the liquid gold foodstuff in so many of our products puts pressure on us all to push for change.

Global Witness points to the upcoming EU legislative proposal on tackling deforestation - set to be published on November 17th - as an opportune moment to do so.

The European Commission’s current approach reportedly has several loopholes which could limit its aim of addressing tainted products in EU supply chains.

To stop enabling human rights abuses and environmental degradation in PNG, the proposal must require compliance with international human rights instruments and principles, such as obtaining Free, Prior and Informed Consent (FPIC) of indigenous peoples and local communities.

Without this, EU-based businesses are relying on uneven national standards, and EU consumers cannot guarantee we are purchasing deforestation-free products.