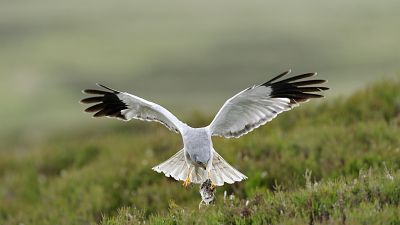 One of Scotland’s biggest community land buyouts is doubling to more than 4,200 hectares, following a mammoth fundraising effort.

The Dumfriesshire town of Langholm has just succeeded in raising £2.2 million (€2.6 million) to buy 5,300 acres (around 2,100 hectares) from the Duke of Buccleuch, one of the UK’s most powerful landowners.

It will join the first, similarly-sized plot the community secured last year, thereby maximising the benefits of the Tarras Valley Nature Reserve for people, nature and climate on precious peatland.

“This is about a grassroots fightback against the climate emergency and biodiversity crisis, and helping to create a better future,” says Jenny Barlow, estate manager of the reserve.

“It’s been a rollercoaster, but the generosity and unwavering support of so many wonderful donors and volunteers have got us over the line in the nick of time.”

It had been touch and go for months: 31 July was the deadline, extended by the Buccleuch estate from May. A £1 million (€1.2 million) grant from the Scottish Land Fund - a government fund for community takeovers like these - and a €288,000 public crowdfunder was topped up by three big donations last week.

Ongoing land reform in Scotland is a seachange for communities which have been tenants for centuries. More than 200,000 hectares of Scottish land (around 3 per cent) is now under community ownership, much of it in the Highlands and Islands like the Hebridean Isle of Eigg.

But it’s less common in southern areas like Dumfries and Galloway. Speaking to Euronews Green in June, Jenny said that this is just the start of their journey.

“It’s a long-term shift, because there’s been one landowner that’s owned all the land around here for centuries. So it’s quite a shift in terms of how people see it,” she said. “We’ll know we’ve got there when people start to say ‘This is ours, it’s not theirs, it’s ours.'”

What are the environmental benefits of Langholm’s land ownership?

The Langholm Initiative’s ecological project is a long game. But they’re already starting to see species return that haven’t been spotted in decades, says Barlow. Majestic golden eagles have visited from the South of Scotland Golden Eagle Project.

What was already a Special Protection Area (SPA) for hen harriers has become an even safer breeding ground for these birds. A live camera will soon enable people to watch the progress of chicks in the five nests built this year. Charity partners Hen Harrier Action and RSPB are satellite tagging the birds to help protect them from persecution.

The team recently completed a ‘BioBlitz’ - a big, biological community-led survey to take stock of all the species on the Langholm Moor reserve. They recorded some kinds of invertebrates and moths for the first time in Dumfries and Galloway.

Setting this baseline is important for the development trust - which bought all rights to the land in the local community’s name - to show its impact.

“The fundamental of it is that we know that to have that impact for nature, we need scale,” says Barlow. “That bigger, better joined up theory for nature conservation and restoration is something we can be really ambitious with, because of the scale that we've got and the mix and diversity of habitats.”

They already own the bottom of the River Tarras. Buying the 2,100 hectares to the north has now brought the whole river catchment into community ownership, creating an aquatic corridor with “exciting” potential.

Peatlands are another vital habitat and the UK’s biggest store of carbon. They lock away an estimated 3 billion tonnes of the greenhouse gas, equivalent to all of the country’s forests plus those of France and Germany.

But the peat soils on Langholm Moor are not in a great state. Until recently, the land was famous for grouse shooting and was managed accordingly by burning heather to encourage fresh growth and feed the birds.

“It’s a new chapter now,” says Barlow. Sports shooting isn’t part of the mix, though she stresses the group is “still really keen to hear from all the people who worked on the land, and know it like the back of their hand.”

Restoring this degraded land is a key part of the initiative’s plans - ensuring it remains a huge carbon sink rather than an emitter. The team are also working with the Woodland Trust to expand the area’s ancient woodland, removing conifer plantations and replacing them with native trees.

10 years after intensive grazing stopped, trees are already regenerating all over the landscape, explains Barlow. “It’s incredible to see how, when you give nature a chance, it starts to rebalance and restore.” Only a helping hand is needed.

But what really sets the project apart is its centring of the local community, in a tight trio with nature and climate.

Why is community at the heart of Langholm’s plans?

A once thriving textile town where Edinburgh Woollen Mill was founded, Langholm has been in economic decline for many years.

Ownership over the reserve is helping to reverse those fortunes.

An alternative, nature-based economy might not be a ‘silver-bullet’, says Barlow, who moved from Sunderland in the northeast of England. But it does create a variety of jobs, from employment on the land to small wind and solar farms. There are also the knock-on effects of ecotourism in Langholm and Eskdale village.

“I suppose when we talk about climate action, there is that other bit of a just transition - of bringing people along with you,” she says.

“And I think that's the thing that, hopefully we can show: that actually, it isn't just about restoring the natural world, it is about providing new opportunities and new economic opportunities for people in that as well.”

Langholm Initiative’s democratic model of ‘co-design’ is in stark contrast to the schemes of some private landowners in Scotland. It has won them support and followers from all over the world.

Now they’ve “defied the odds” and “achieved the impossible” for a second time in two years, with a fundraising campaign featuring everyone from young footballers to local business owners, ‘junior rangers’ to tree-planting pensioners.

“We’re really keen that we aren’t just looking inwardly at the town,” adds Barlow, “but giving a really positive, inspiring example of the impact people can have.”