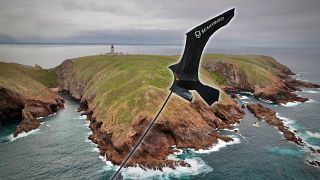 The Berlengas archipelago off the coast of Portugal is a nature reserve — and a precious breeding area for shearwaters, cormorants, gulls and other seabirds.

Ana Almeida and Elisabete Silva are marine conservation officers at the Portuguese Society for the Study of Birds. For years, they’ve been helping the local seabird populations.

"Seabirds are amazing!” says Ana. “They are birds that explore three different environments: the skies, land and the sea. And they have these fantastic and amazing adaptations to live in the water. They are really resistant, and they are excellent sentinels of the health of our oceans. So if they are facing decline, it is telling us that the sea is not healthy anymore and that we have to do something."

The Balearic Shearwater is the most threatened seabird species in Europe. It uses this area during winter, and the predictions say that in 60 years if we don't do anything, it will be extinct.

On the main islands of the archipelago, they maintain artificial nests to help shearwaters raise their young. But while some bird species are doing well, others are steadily declining — and in recent decades, some have completely disappeared.

"Seabirds are the group of birds that are more threatened by human activities and other threats,” Ana explains. “For example, the Balearic Shearwater is the most threatened seabird species in Europe. It uses this area during winter, and the predictions say that in 60 years if we don't do anything, it will be extinct. It will not exist anymore. So we have several species facing different threats and having severe declines in their populations."

Accidental killings are a major factor

But why this decline? Could it be related to the fishing in these rich waters? Half of all seabird populations in Europe are declining or considered threatened. Many of these birds are accidentally killed by hooks and nets of fishing vessels - that’s more than 200,000 seabirds every year, one bird every three minutes - in European waters alone.

Among the many causes of the seabirds' decline, accidental bycatch is considered one of the most important. So here in Berlengas, conservationists are working together with fishermen in a EU-funded project that seeks to protect the birds in a simple and affordable way.

These fishermen use a long-line with baited hooks that float close to the sea surface. Birds that dive for the bait can get hooked and injured or even killed. For the fishermen, such accidents are not just upsetting: they damage their gear and decrease catches.

"We don't like it,” says fisherman Francisco Nunes. “Because in addition to capturing the animal it messes with our work — if a bird gets trapped, we won’t catch any fish in the entire area."

Researchers tried many ways to keep the seabirds away, but what seems to work best is a simple "Scarybird". It flies like a kite, looks like a predator and can be placed at sea close to the fishing lines, scaring real birds away from the danger zone.

“The birds keep away, which reduces the risk of accidental capture,” says Elisabete. “That is a very good result, because it is a very simple tool that is a win-win for both the birds and the fishermen."

The research project — MedAves Pesca — is now assessing the results with the goal of helping protect seabirds in other parts of Europe and the world as well. The project is a finalist of the European Natura 2000 Award this year.

But what about life underwater? Lost fishing nets carry on trapping marine animals for ages. Removing them can be expensive and risky for divers. And with time, fishing nets fall apart into tiny fragments that find their way into the food chain — and eventually our meals.

At CIIMAR, the Interdisciplinary Centre for Marine and Environmental Research at the University of Porto, scientists are studying the microplastics that come from fishing gear and which can endanger marine life in many ways - including by spreading harmful germs.

"Nets are made of plastics, so we have all the problems that we see today of plastics in the water,” says Marisa Almeida, a researcher in environmental chemistry at CIIMAR. “And they can produce a small pieces of plastic and eventually microplastics, which can end up being food for the fish and end up in the food chain. Or they can absorb a lot of pollutants that are in the water."

"There are some bacteria and some microorganisms that are absorbed in the plastics,” adds Sandra Ramos, a researcher in marine ecology, also at CIIMAR. “It's like a new home for them. So the problem is not only physical, but it's also that microplastics can work as a transporter of other contaminants to all the wildlife that ingests them."

It's best to find and retrieve lost nets before they break into small pieces. The CIIMAR researchers teamed up with robotic engineers from the INESC TEC institute for another European project - NetTag. They've designed IRIS - a robot that can find its way underwater using acoustics and artificial intelligence.

"This robot was developed to help the fishermen to find lost fishing gear, lost fishing nets,” explains Alfredo Martins, Senior researcher in robotics at INESC TEC/ISEP. “In order to do so, the fishing nets are equipped with a small transducer, a small piece of acoustic kit. So it looks like this small cylinder that we see here. When we put the robot underwater, the robot starts to ping, starts to ask, is anybody out there? And so this tag will answer it.

"So the robot can find its own way towards the net. In this way, the fishermen, when they want to recover the net, they will drop the robot in the water, and the robot can start to look for where the net is."

The engineers are quite happy with how IRIS works in the experimental pool. But can it perform in the open sea, with its underwater currents, obstacles and limited visibility?

Typically, you would have a robot like this being owned either by the harbour or by the fishing association. And then if it is needed to pick up some fishing gear underwater, or to inspect something and to see what's happening in a certain place, they can use the shared resource, which is the robot.

To find that out, we went on a field trip with local fishermen. They hate losing their nets which are very costly to replace.

"If we lose a net we try to scrap around with a hook, and if we don't find it right away, there's nothing else we can do!" says fisherman João Graça Nunes.

Researchers drop the net with an acoustic tag into the sea and then deploy IRIS to find it and bring it back.

They say the acoustic tags are inexpensive and can be added to nets without affecting cost. The robot is intended to be easy to use and affordable enough to be shared between a few vessels.

"Typically, you would have a robot like this being owned either by the harbour or by the fishing association,” says Alfredo. “And then if it is needed to pick up some fishing gear underwater, or to inspect something and to see what's happening in a certain place, they can use the shared resource, which is the robot."

As the prototype nears completion, the researchers are aiming to find a partner to bring the robot to the market in the foreseeable future — hopefully giving the fishing industry another tool to reduce its environmental impact and better protect marine life from accidental harm.