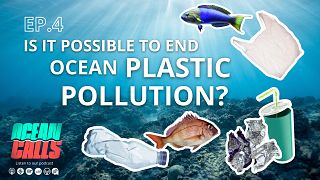 When François Galgani dived into the deep sea for the first time, he was expecting to see pristine nature. Instead,1,000 metres deep in the Mediterranean, he saw a variety of plastic bags and bottles belonging to brands he recognised.

“Some of these companies disappeared decades ago, but their bottles were still on the bottom of the sea just because there is less oxygen and there is no light (to decompose them),” recalls the oceanographer working for the French Research Institute for Exploitation of the Sea (IFREMER) in this Ocean Calls episode.

Listen to the episode in the player below.

“It was really frustrating because I was expecting (to find) something like new species, a treasure or something very exotic as it was the deep sea, but instead it was accumulating litter,” Galgani said.

Plastic comes in all shapes and sizes

WWF estimates that large plastic litter kills around 100,000 marine mammals such as whales or dolphins every year. Often, animals confuse waste with prey or become entangled in plastic fishing gear.

But Professor Pennie Lindeque, head of science at the Marine Ecology and Biodiversity department of the Plymouth Marine Laboratory, argues that marine pollution is a much broader issue than the floating plastic bags seen in campaign posters. Marine plastic pollution “comes in all shapes and sizes”, she says, including those that we “don’t readily see”.

“The more we've looked into this over the years, the more sources (of microplastic) we find”, she said.

“Even simple things like driving cars or riding a bike produce these small microplastics through the wear of the tyres, and these get blown or washed into the marine environment”.

Subscribe to our show on your favourite podcast app.

Both scientists agree that plastic, albeit being an extremely useful material, is a hazard when it is found in nature. Is there a way to remove it from nature? Or prevent it from getting there in the first place? Can we end plastic pollution in the ocean?

Listen to this episode of Ocean Calls to find out.

Created in partnership with the European Commission's DG Mare.

Scottish exhibition explores the past, present and future of plastic

What’s the future of offshore renewables?

Can we protect our high seas?