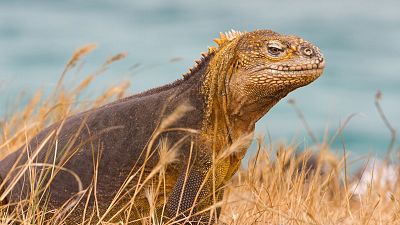 A lost species of iguana has been ‘born again’ on the Galápagos Islands for the first time in nearly 200 years.

The Galápagos Island land iguana was last spotted on Santiago Island more than 187 years ago. Ecologists determined that the reptiles were locally extinct.

But three years ago, thousands of the creatures were reintroduced to the islands - and new images prove that the lizard is breeding once again.

What is the Galapagos Land Iguana?

The Galápagos Islands used to teem with reptiles.

Located 1000 km west of Ecuador, the archipelago was made famous by English naturalist Charles Darwin’s 1835 expedition.

When Darwin visited, he recorded a massive number of land iguanas. However, they had disappeared by the early 20th century, with local populations decimated by feral pigs and dogs.

The lizards survived on nearby islands, but in small numbers. They are listed as vulnerable on the International Union for Conservation of Nature's (IUCN) Red List of Threatened Species.

To help protect the species, the Galápagos National Park authority decided to reintroduce them to Santiago island.

In 2019, they released more than 3000 of the reptiles on Santiago - a process that Galápagos National Park director Danny Rueda Cordova has described as a “great success.”

"187 years later we witness again a healthy population of land iguanas, with adults, juveniles and neonates on Santiago Island,” he said.

"This is a major conservation achievement and strengthens our hopes of restoring islands that have been severely affected by introduced species.”

What other Galápagos Islands animals are threatened?

The mission to restore the Galápagos Islands is not over.

According to the World Wildlife fund, their unique ecosystems are threatened by illegal fishing, non-native species, and more than 160,000 tourists every year.

However, recent months have seen positive developments on the island. In 2019, scientists spotted the chelonoidis phantasticus - ‘fantastic giant tortoise’ - for the first time in more than a century.

The finding of one alive specimen gives hope and also opens up new questions, as many mysteries still remain

The last known specimen was found in 1906.

"The finding of one alive specimen gives hope and also opens up new questions, as many mysteries still remain," said researcher Adalgisa Caccone.

Last week, scientists discovered two flamingo nests in an isolated lagoon. The birds had not been spotted for more than 20 years.