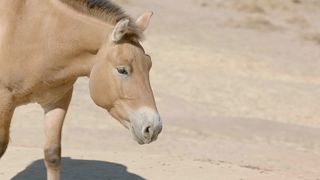 Thanks to sci-fi films, clones don’t usually have a good reputation. But what if it was the only way to keep an endangered species healthy?

Formerly extinct in the wild, the Przewalski's horse has survived for the past 40 years almost entirely in zoos around the world.

Several wild herds have been reintroduced to their native habitat, the grasslands of China and Mongolia. There's also a small population living in the Chernobyl exclusion zone.

However most of the world’s 2,000-strong Przewalski’s population descends from just 12 wild horses saved from extinction. With such a limited gene pool, the future of the species did not look healthy.

That was until, in 2020, the DNA of a Przewalski's horse frozen 42 years ago was successfully cloned. The result is a horse named Kurt, and a lot rests on the shoulders of this little colt.

Why did scientists clone a horse?

The particular stallion with whom Kurt shares his DNA was selected, along with around a dozen others, to have samples taken and frozen in 1980 as part of the San Diego Zoo Wildlife Alliance’s Frozen Zoo project.

Though the technology was not sufficiently advanced at the time, the scientists took a risk, hoping that cloning would be perfected and the frozen samples could be used to help this species, along with many others in the future.

Kurt’s genetic archetype was chosen to be part of the project as he was identified as being the most genetically different to any other living Przewalski's horse at the time.

It's hoped that once Kurt reaches maturity in three or four years time, he will be able to breed and bring more genetic diversity to his species.

Has Kurt the cloned horse met other horses?

Though the cloning project was run by San Diego Zoo, Kurt was born at a facility in Texas and moved to the zoo at eight months old.

He has recently been introduced to a female of his species, named Holly. Wildlife care experts at the zoo hope that the introduction will result in Kurt learning the behaviours of a wild horse.

Watch the video above to see Kurt in action.