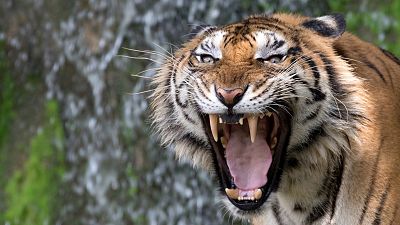 Tigers, elephants and leopards in Asia are defying 12,000 years of extinction trends by thriving alongside humans, new research reveals.

As humans encroach further and further into the natural world, many wildlife species struggle to survive. This existential threat is often worst near human hubs.

But it doesn’t have to be this way, a new study suggests.

University of Queensland researchers analysed paleontological records to compare the historic distribution of Asia’s 14 largest species with their populations in present-day tropical forests.

“[Our] results show that, under the right conditions, some large animals can live nearby humans and avoid extinction,” said PhD candidate Zachary Amir, from UQ’s School of Biological Sciences and the Ecological Cascades Lab.

“These results challenge the narrative within some conservation circles that humans and megafauna are incompatible.”

Why are some animals thriving near humans?

Usually, large animals struggle to live alongside humans, because they are targeted by hunters.

This trend is called ‘trophic downgrading.’ But humans can also help animals, the study suggests.

“In the case of tigers, elephants, wild boars and clouded leopards, their Asian populations are higher nearby humans,” Amir said.

“This may be the outcome of tougher anti-poaching efforts in the national parks that are closer to human settlements and are more frequently visited by tourists.”

If humans can “get our act together” and limit poaching, there are conservation opportunities in forests previously considered too far degraded or too close to cities.

What is the prognosis for wildlife around the world?

Scientists warn that we are living through the sixth mass extinction. Up to 150 species disappear every single day.

Humanity is “losing the war” to save nature, the authors of the dire prognosis informed us.

In some parts of the world, the issue is particularly bad - wildlife populations in Latin America and the Caribbean experienced a 94 per cent drop in just 50 years.

However, it’s not too late to protect the animals that remain and to help nature recover.

One solution is to pivot toward more sustainable food production. Cattle grazing, for example, is one of the biggest drivers of deforestation.

If everybody ate less meat, this destruction could be partially halted, said David Edwards, director of food strategy at WWFUK.

“The way we produce and consume food is both the biggest driver of nature loss and a significant contributor to climate change,” he warned.