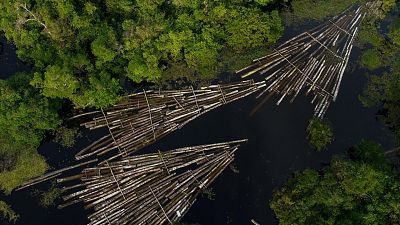 Financial institutions and companies with the most influence are doing little or nothing to address deforestation, a new report has revealed.

The Forest 500 report warns that these organisations are undermining global climate targets by failing to tackle the problem. A third of the 350 companies examined had no policies in place to guarantee that their products are not driving deforestation.

“We've been running [the report] since 2014 and unfortunately, it shows really disappointing results. That progress is still lacking, there hasn't been much change in the last year,” says Sarah Rogerson, Programme Manager for the Forest 500 report.

“We have seen lots of commitments from the private sector over the last 10 years really but obviously, they're not working. Deforestation is still increasing.”

Nearly two-thirds of these financial institutions have no specific policies in place to address the problem in their portfolios either. That includes three of the world’s biggest asset managers BlackRock, Vanguard and State Street.

What we’re trying to hammer home is that there’s no solution to climate without a solution to deforestation.

Together, they are providing a total of €4.4 trillion to companies with the most exposure to deforestation in their supply chains.

Rogerson adds that with deforestation contributing 15 per cent of global carbon emissions, tackling this problem should be an important part of any company’s climate commitments.

“What we’re trying to hammer home is that there’s no solution to climate without a solution to deforestation.”

Which companies are falling behind on deforestation?

To produce the annual report, Global Canopy looks at what commodities are causing the most global deforestation. This includes crops like palm oil, soy, beef, leather and timber.

They then trace these through the supply chain to find the 350 biggest contributors and the 150 financial institutions that are funding them.

“It does mean we have lots of companies in there that you won't recognise the name of,” Rogerson explains.

“They are producers that don't have any kind of consumer-facing presence, but they'll be in the supply chain of those that we do recognise and or they’ll have a loan from a financial institution that we see on the high street as well.”

There are some well-known names in there too, though - particularly when it comes to “hidden ingredients” such as soy. Commonly used in animal feed, brands with no deforestation policy for soy include Häagen-Dazs ice cream, Heinz mayonnaise and Hershey chocolate bars.

What can be done to prevent companies from undermining climate goals?

Leaders from 141 countries signed a declaration at COP26 to “halt and reverse forest loss and degradation by 2030.”

“Governments are now introducing a requirement for companies to carry out checks to ensure there is no illegal deforestation in their supply chains,” says Nigel Topping, High Level Champion for Climate Action at COP26.

“In November 2021, the Environment Act made this law in the UK and the government is consulting on the full scope of the measures. Similar due diligence legislation is in the pipeline in the European Union and the US.”

Those that are failing to act now, the report warns, will struggle when these new due diligence requirements come into force.

More than 30 financial institutions with nearly €8 trillion in assets also pledged to do their best to eliminate deforestation driven by commodities from their portfolios at COP26. . But, as the report reveals, only four of these were among the 150 with the most influence on the sector.

Rogerson says that is why the Forest 500 report has turned its attention to the finance sector, “as a way of adding more pressure onto the companies that need to act.”