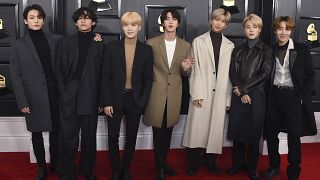 BTS are the most streamed group ever on Spotify, this year they walked the red carpet in LA and condemned anti-asian hate   -   Copyright  Jordan Strauss/Invision/AP
By Tim Gallagher  •  Updated: 18/11/2021

You may not know what ‘Hallyu’ means, but you will have experienced it.

Have you heard of 'Squid Game'? Did you see 'Parasite' win the most important Oscar of last year?

‘Hallyu’ or the ‘Korean wave’ is a term for the unstoppable rise of Korea’s cultural exports across the world, and nowhere is this more visible than Korean genre K-pop's domination of the music industry.

K-pop is increasingly popular with young and old alike, with Spotify registering 41 billion K-pop streams since 2014.

It is part of a concerted effort on the part of the Korean government for the country to become a net-exporter of culture and media, a form of "soft power", according to some.

In Europe, Brits are the biggest K-pop fans, ranked 11th for streaming numbers out of every country in the world. Meanwhile, France saw a 13 per cent increase in K-pop streams between 2019 - 2020.

The genre's popularity on the continent is such that MTV’s European Music Awards (voted for by European music fans themselves) now have a category dedicated to K-pop. Not that it’s needed, considering that popular group BTS swept four categories including best group, best pop and biggest fans.

BTS are the most prolific of the young K-pop stars, currently holding the record for most streamed group on Spotify ever. The group of seven also broke records by attracting more than 101.1 billion views within 24 hours of the release of their song ‘Dynamite’.

They are far from the only K-pop group taking Europe by storm though. 'The Album', the 2020 release of all-girl group Blackpink, reached the top-10 in Belgium, Finland, Germany, Hungary, Norway, Spain and Slovakia.

Their appeal is set to grow as K-pop groups are actively encouraged to embrace the English language. 'Dynamite' was BTS's first track completely in English, a fact believed by some to have contributed to it's success.

Most band members are in their 20s and inspire a young female audience, with over half of Spotify listeners aged 18 - 24 and 73 per cent identifying as women.

Large fandoms have developed both on and off social media, with specialist groups and fan pages abounding. BTS UK Army Unite, who share updates on BTS and organise fan projects, have nearly 70,000 Twitter followers.

Offline, fans are catered to with sold-out club nights and shops filled with Korean music and merch.

KStars (a K-pop store in Manchester, UK) is both a high-street hit and an internet sensation with 39,000 TikTok followers tuning in for tours from the staff.

20-year-old Cat works at KStars and came across BTS when Youtubers she followed shared the video for their song 'DNA'.

“I just kept replaying it but I still in my head was like no I don’t like it, it’s just catchy. Then I realised I was a fan. It just went downhill from there.”

Attracted to the choreography and ‘catchy’ music, Cat also values the affinity between K-pop stars and their fans.

“How close you feel to the idols. It's just not like anything else that I've ever been a fan of before.

“It just catches you and I can’t explain it, it just gets you.”

After initially attending BTS and Blackpink concerts with her mum, Cat found that the gigs and fandoms could be a great way of bonding over shared interests and making friends.

“Once you get into one group it turns into six groups or twenty groups.

“Having someone you can talk to with the same interests is just a big thing for younger fans. In high school it is harder to make friends, if you can see someone with a BTS badge on it makes it easier to talk to people.”

“There’s a lot more connection between artists and fans than with western artists.”

Hannah thinks that ‘stanning’ – becoming an extremely passionate or devoted fan – is easier for K-pop fans because of the emotional intimacy created between artists and their followers.

“They seem to care a bit more,” she adds.

The influence of K-pop stars spreads beyond streaming and Youtube to style, decor and food. The stuffed toys, photo cards, and magazines that line the walls of KStars are evidence that K-pop can be something of a lifestyle.

The stars themselves are closely watched and emulated by fans to an astonishing degree. In 2019 Downy Liquid Fabric Softener sold out a 2-month supply of their scent “Adorable” in one day, because BTS member Jungkook revealed he uses it in an online Q&A.

Both Cat and Hannah have noticed ‘Hallyu’ spreading beyond a youth-led subculture, particularly when old friends and family started to watch Squid Game.

“I saw family members sharing it and I was like how the hell have they found that? How have they heard about it? That's really weird,” says Hannah.

For now the Korean government’s scheme seems to be working and the rise of K-pop is going nowhere but up.

Iconic Manchester venue faced with closure due to 'gentrification'

Swing from clouds at Russia's new 'Serenity and Delight’ exhibition