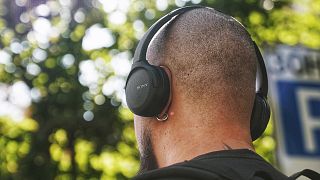 Listening to music on the go is part and parcel of our increasingly digitised world in 2020. Ever since Apple’s iTunes library came about at the turn of the millennium, we’ve been able to accumulate songs and create our own playlists with ease. There is something uniquely satisfying about having a home-made collection of tracks to complement a mood, or transport us back to a nostalgic moment in time.

But as streaming services like Spotify started to take off in 2006, there was a noticeable shift from ownership towards access. Rather than purchasing and downloading music, we were streaming. By 2008, the Spotify ‘freemium’ platform gave us access to over 50 million tracks, at the mere tap of an index finger. As of February 2020, it boasts 271 million monthly active users.

Only now are we starting to question what the advent of streaming really means for the planet. What is that continuous stream of live data doing to our environment? Could it be more eco-friendly to revert back to buying CDs?

The switch from physical to digital music formats, over the last two decades, has led to a huge reduction in use of plastics. The peak of CD production came in the year 2000, when the US industry was using 61,000 tonnes of plastic. In 2016, this dropped substantially to just 8,000 tonnes of plastic, as digital formats took over. This is all thanks to streaming.

However, the same research, a collaboration between the University of Glasgow and the University of Oslo, concludes that the environmental impact of streaming far outweighs the plastic use of physical products. In other words, buying CDs turns out to be greener than listening to music digitally.

Dr Kyle Devine, an Associate Professor in Music at the University of Olso, explains why.

“From a carbon emissions perspective, the transition towards streaming recorded music from internet-connected devices has resulted in significantly higher carbon emissions than at any previous point in the history of music.”

In his 2019 book, Decomposed, The Political Ecology of Music, Devine confirms, “storing and processing music online uses a tremendous amount of resources and energy – which [has] a high impact on the environment.”

The reason streaming is so harmful to the planet is because its effects are largely invisible. Although we can’t see it, listening to music in real time demands a huge amount of power generated by servers often miles away. According to the research, we are emitting over 350,000 tonnes of greenhouse gases per year, because of the need to run remote servers 24/7.

Bringing CDs back to life

Fighting to keep physical music products on the market, Key Production is one of the main manufacturers still in business. Founded in 1990, it has put the environment at the forefront of its agenda since day dot, and is still thriving today, turning over around £14 million a year. Living proof that the physical market has not disappeared, Key produces everything from vinyls, CDs and DVDs, all the way to old-school cassette tapes, for musicians all over the world.

Despite her brilliantly pink hair, founder Karen Emanuel’s green credentials are undeniable. Over the last 30 years she has witnessed the industry’s seismic shift towards digital, somewhat sceptically, while monitoring statistics and doing everything in her power to ensure physical products don’t die out.

From the decision to move to FSC certified card and use vegetable inks, to limiting shrink wrap and recycling vinyl offcuts, Karen has single-handedly paved the way for a more sustainable manufacturing industry.

“As far back as the start, I made sure our offices were carbon neutral,” Karen tells me. “I’ve been on green energy tariffs since green energy tariffs came out!” Back in the 90s, she explains how no one in the industry cared about their carbon footprint. One option at the time was to charge 2 or 3 pence more, per unit, to carbon offset CDs, but Key were the only ones to adopt it. As a result, they had to give up after a year or two as the market was too competitive. “We were dealing with struggling musicians and the independent sector,” Karen explains, “so you can understand why they didn’t want to pay more for their products to be made.”

What’s more, when it comes to plastic, Karen argues, “not all plastic is bad plastic – it’s deceptive.” While many are quick to criticise shrink wrap (used to protect vinyl records) as unnecessary single-use plastic, it can have its benefits, she explains. Shrink wrap ensures durability of a product. It shields the record from both dust and damage, for its entire shelf life, which in turn means less waste resulting from returns of damaged stock.

The life span of a product is what the manufacturing industry is counting on. “There is an element of sentimentality when it comes to collecting albums,” says Karen.

Not only is the digital music world environmentally unsustainable, “streaming is here and gone, you don’t own it,” she laughs. “When you really like an artist, you want to feel close to them. You want their story and that comes in the form of an album – fans aged 45+ particularly, that is often our audience.”

Apart from anything else, Karen maintains, “fans appreciate the aesthetics of the physical object’s design, like the artwork and booklet. Many want to preserve a physical collection of their favourite albums, or simply enjoy having a hard copy of the data.”

For the same reason, vinyl records and even cassette tapes are making a comeback, as the vintage element is nostalgic for many people. According to Which magazine, 4.2 million vinyl records were sold in 2018 in the UK, which makes it the 11th consecutive year of growth. Many musicians also claim sound quality is far superior to that of MP3s, perhaps another reason for the vinyl revival.

Cassettes have made a resurgence too, proving to be a popular option amongst younger artists. “Cassettes are trendy yet inexpensive merchandise for bands to sell at gigs. The 18-24 year olds love them because they’re ‘cute’ and fit in a pocket or Christmas stocking,” says Karen. Currently, cassette sales are at their highest since 2004.

If we are to believe the evidence, it seems returning to buying physical copies of music would improve our carbon footprints substantially. But many are not willing to make that sort of change due to the ease of digital streaming. Another problem is simply the lack of research in the field. Creative climate organisation Julie’s Bicycle released an influential report in 2009, entitled, The carbon impacts of recorded music products in a time of transition. While the research is thorough, there have been little to no studies of the same breadth ever since, up until Kyle Devine’s aforementioned book release. “This is a pivotal time for the recorded music industry to play a proactive role in addressing the climate impacts of digital music,” states Julie's Bicycle.

To fully understand the environmental impact of the music industry, more work must be done to attribute responsibility to the sector.