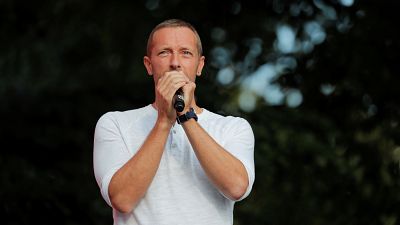 Coldplay has announced it will not be touring its new album for the forseeable future, in a bid to address the reality of the climate crisis.

The awaited new release, Everyday Life, goes live on November 22nd and will be the band’s eighth studio album, in two parts. A double whammy, the first half will be entitled ‘Sunrise’ and the second ‘Sunset’.

However, frontman Chris Martin told BBC news in an interview that Coldplay would not be touring the album until they work out how their tour can “not only be sustainable”, but how it can be “actively beneficial” to the planet.

He added that the band would be “disappointed” if the next tour was “not carbon neutral”, admitting that “the hardest thing is the flying side of things.” While flying might end up being inevitable on a tour with a quick international turnaround, the British band have a dream to do “a show with no single use plastic” and “to have it largely solar powered.”

Coldplay has received criticism on twitter for conducting the live interview in Jordan, where they are currently playing a show. BBC interviewer Colin Paterson flew out to the capital Ammam, where he spoke to Martin live on BBC Breakfast and Radio 5 Live on Thursday morning. Twitter users are calling out the hypocrisy – claiming the interview could simply have been done on skype from the studio in London.

One twitter user 'Ali Ali' commented on the below video saying, "@ColinGPaterson I'm guessing he walked it to Jordan to do the interview? ? "

Despite the twitter attacks, Chris Martin maintains we shouldn’t be too "overzealous in criticising others” as everyone will start to become more sustainable if leading figures lead by example.

Will choosing not to tour make a difference to the environment?

The decision not to tour will inevitably have a substantial effect on their carbon footprint as a band. Popstar Billie Eilish, branded “the most talked-about teen on the planet”, made a similar pledge just last month when she committed to a green 2020 world tour.

We spoke to Director Alison Tickell from London-based charity Julie's Bicycle about what effect this could have on the rest of the music industry. Julie's Bicycle is deeply engaged in the arts and culture sector, supporting the creative community to reduce their impact on the environment. In 2015, they released a Touring Guide document intended to help travelling musicians, actors and artists adopt a more sustainable tour model.

Alison told Euronews Living in an exclusive quote, "it is a sign of the times that Coldplay - a major international band - is taking the climate crisis so seriously that they are rethinking touring."

Addressing the music industry as whole, she continued, "re-imagining touring in a net zero carbon world is one of the music industry's biggest challenges - from the travel and transport of bands, gear, and audiences; to the way events and venues are powered; and food and drink served."

While the news is part of an "exciting critical shift recognising the urgency" of the climate crisis, concludes Alison, "there is a long way to go to embed environmental action into touring practice."